By bagging 18 Lok Sabha seats two years ago, the BJP created a perception that it was coming to power in Bengal.

KOLKATA:  The soaring-up graph of BJP’s vote-share since 2011 in West Bengal received a jolt in 2021 Assembly elections as the saffron camp’s electoral vote share dipped from 40.7% to 38.13% secured during the 2019 Lok Sabha elections.

By bagging 18 Lok Sabha seats two years ago, the BJP created a perception that it was coming to power in the state.

But the party’s momentum received a massive blow as it bagged victory in only 77 Assembly seats, which falls short of 44 seats comparing to the saffron camp’s peak performance in the 2019 elections. 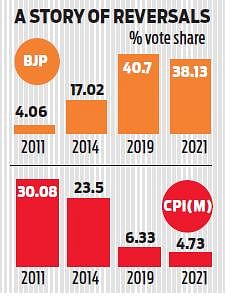 "Growth in our vote-share was completely because of erosion in CPI(M)’ vote bank. But in this year’s result shows the CPI(M)’s further erosion did not give us any dividend. Rather, it went in favour of the ruling Trinamool Congress. Besides, we, too, lost our strength in terms electoral stake in terms vote-share,’’ said a senior BJP leader.

Elaborating on the possibilities behind the drop in BJP’s vote-share, the leader pointed out the party’s strategy of welcoming all TMC turncoats without scanning their background might be responsible.

‘’We were gaining strength in West Bengal riding anti-TMC sentiment. People were supporting us against TMC’s misrule and atrocities. When these section of electorates showing allegiance to the BJP found their tormentors in the same camp and being fielded in the Assembly elections, they decided not to support us. Rather, they possibly voted for th TMC to ensure defeat of the turncoats,’’ he explained.

Citing another example, the leader said the saffron camp started performing impressively in Dalits dominated Junglemahal area since 2018 pandhayat elections. "But we received a jolt in the region because the TMC turncoats who were elected in local civic bodies failed to deliver," he added.