For the first time since Independence, there will be no Left Front or Congress representative in the West Bengal Assembly.

KOLKATA: For the first time since Independence, there will be no Left Front (LF) or Congress representative in the West Bengal Assembly.

The verdict of voters against these two political forces did not spare them even in their traditional strongholds in four districts Murshidabad, Malda, North Dinajpur and South Dinajpur. 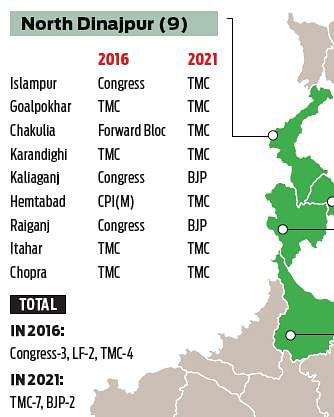 In the 2016 Assembly elections, the LF-Congress combine had bagged 37 seats in these districts, while the ruling TMC had won just eight out of 47.

Five years later, TMC bagged 36 seats and BJP jumped to 11 from one in this region. The insecurity of the minority voters resulted in a swelling of votes for TMC, as they thought that they would be safer under the ruling party than under Congress or Left.

The state Congress leaders held BJP’s Hindutva rhetoric responsible for the party’s debacle in the minority-dominated regions of the state.

“Even in 2016, we were able to retain our traditional vote bank among the minority community. But this time, these set of electorates shifted their loyalty to the ruling party en bloc. They felt that our party would not be able to protect them from BJP’s aggressive politics,” said a Congress leader.

Most of the minority community residing in Malda and Murshidabad, which account for 34 Assembly seats, had migrated from Bangladesh.

“These people were scared after the BJP started talking about citizenship for Hindu refugees by implementing the CAA,” said the leader.

The election results in these regions clearly reflected extreme polarisation of Muslim votes. BJP’s Hindutva rhetoric gave Mamata Banerjee must more dividend than the saffron camp expected to have by playing the card of politics on the line of religion. The TMC, however, claimed that the party also got support of Hindu electorates, other than the minorities.

“Women voters realised they would not be safe if BJP comes to power in Bengal. At the same time, young voters, who believe in West Bengal’s tradition of communal harmony, decided to reject BJP’s politics on the line of religion,” said a TMC leader.

BJP leaders also admitted that the party failed to take women voters into confidence on the issue of their security.

“Some incidents in Uttar Pradesh, where our party is in power, may have played a part. That went against us as TMC repeatedly highlighted it in their poll campaigns,’’ said a BJP leader.