Belt and road a big initiative. Stay out of it at your peril

Peppercorns changed world history. In 1498, Vasco da Gama sailed around the Cape of Good Hope to India, and later returned to Europe with peppercorn worth 10 times the initial investment.

Peppercorns changed world history. In 1498, Vasco da Gama sailed around the Cape of Good Hope to India, and later returned to Europe with peppercorn worth 10 times the initial investment. Ottomans, historically the only Eurasian power with a serious navy, made a few attempts later on, but could not stem the European imperial expansion in the Indian Ocean. Land routes gradually lost importance. You know the rest. Who were the biggest losers? Turks, Indians and the Chinese, among others.

Now China, most dependent on foreign trade and energy supplies, is moving resolutely to redefine future trade routes. It is promoting a complex web of infrastructure that would connect China to Europe from the land and sea.

The initiative comprises a Silk Road Economic Belt and a Maritime Silk Road. Thus, the ‘Belt and Road’ initiative, as this mega project is called, will involve some $4 trillion of investment on roads, ports and other installations throughout Eurasia. Announced by President Xi Jinping in 2013, ‘Belt and Road’ is already redefining not only geo-economics, but also geo-politics. One can only stand up and applaud in awe. 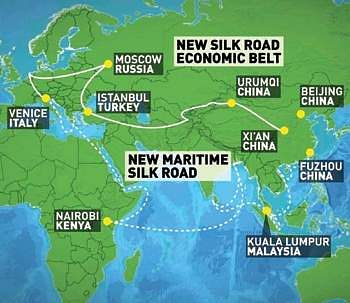 Yet, India does not appear happy. The road to a port in Pakistan seems to be a concern. India has also been championing, even before ‘Belt and Road’, another multilateral connectivity project. I have long argued that the other project, the so-called ‘North-South Corridor’, had big flaws. A major flaw of that corridor was the lack of enthusiasm and commitment of the countries involved.

More importantly, lucrative financial incentives were absent to propel the initiative that would connect India to Chabahar port in Iran, and from there to Azerbaijan and Russia, thence taking an awkwardly long and winding road to northern Europe.

I advocated instead that the cargo move westward to Europe from Iran via Turkey. Connectivity between Iran, Turkey and the rest of Europe is already tiptop. An even better route, technically, was to use the ECO train through Pakistan and Iran to Turkey, but you would guess why this did not spark interest.

Turkey went ahead nonetheless. Aware of the need to form rail connection to China, Turkey had been championing a transportation corridor through Central Asia to Turkey and Europe. The ‘Middle Corridor’, as this was called, is brought under the umbrella of the ‘Belt and Road’ with an agreement in 2015. Opportunity still exists for India to come in.

Next week on May 14-15, 65 countries will assemble in Beijing to celebrate this historic initiative. Close to $900 billion is already committed to ongoing projects. China bears a big chunk of the costs. The work is just beginning and several projections point to 50 years later for its completion.

Several studies also identify countless difficulties, problems, shortcomings and challenges. Some pushback from the EU and the US, several commentators argue, should also be expected. The Obama administration was very slow and confused in responding to President Xi’s announcement, and the US does not seem to be on top of things as yet either.

My point would be: This project is a huge deal. Stay out of it at your peril. Instead, contribute and get your own share, letting politics slide back for now.

The world economy needs growth. The ‘Belt and Road’ initiative promotes infrastructure development and connectivity in a region of the world where these are much needed. We have long been talking about an increasingly connected world. The ‘Belt and Road’ is about a literally connected world. And, this time it would be much more than peppercorn that the traders would carry.
Follow him on Twitter @akcapar