For mountaineers climbing the Mount Everest, Hillary Step is the last obstacle before reaching the summit. But the Step has been destroyed

For mountaineers climbing the Mount Everest, Hillary Step is the last obstacle before reaching the summit. But the Step has been destroyed 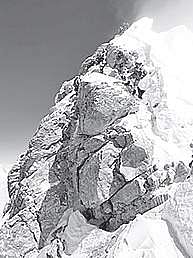 Rock crumbles
Located at 8,790 metres, the Hillary Step is a rocky outcrop on the Nepalese side of the mountain near the peak of Mount Everest. It was named after Sir Edmund Hillary who along with sherpa Tenzing Norgay was the first person to reach the peak in 1953

Hillary Step
The Step is 12 metre-high and was a near-vertical climb, writes Kate Lyons in the Guardian. So, how did the Step disappear? Probably due to the 2015 earthquake. Reports that the Hillary Step was destroyed came out earlier but the conditions made it difficult to confirm. But British mountaineer Tim Mosedale is sure that the Step is gone

More dangerous?
Mosedale reached the Everest’s summit May 16 and later posted pictures of the Hillary Step. It showed the structure had changed significantly. Now that the Step is no more, will it make the climb more dangerous? It might or might not. The ascent might become easier because it will no longer involve a vertical rock climb. But it could be more dangerous because there may be limited paths up. So, mountaineers have to wait longer at high altitudes, adds Lyons