Another chronicler silenced in Kashmir

What is this history that fells its own chronicler? This presiding ideology that devours its own subject? Which turns a dead body, a silenced voice, into a trophy? 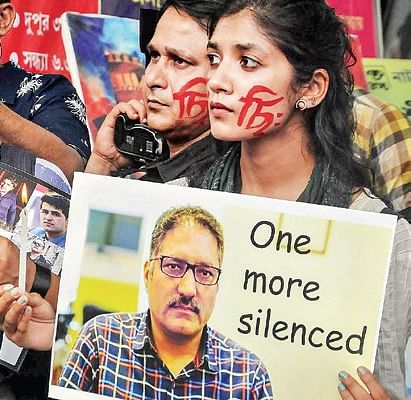 What is this history that fells its own chronicler? This presiding ideology that devours its own subject? Which turns a dead body, a silenced voice, into a trophy? How many more deaths will it take for the bullets to stop attacking the words? Make no mistake, this is a war against the caste of communicators, storytellers. It's a privileged caste, some would say, based on the immense power the flashy televangelists amongst us have accumulated. They miss the fragility, the real vulnerability, of the rest. What can we as journalists do other than string words, or frame a photograph? And that becomes too intolerable for many, and invites violent retribution. For the dead can tell no tales.

Depressing as it may seem, with every such violent death, Kashmir seems to go further and further away from us. Journalists function in a sort of information cooperative—for all the inner rivalries, most scribes would be rendered dysfunctional minus that mutually helpful network of sharing. Sitting in Delhi or occasionally visiting Srinagar, the number of people who you could call and who you simply ask, "Why is this happening? What have you heard?", that pool of fellow storytellers is shrinking. Now, Shujaat Bukhari won't be there to answer those questions, to offer a quick overview or a long analysis, from the heart of what was once called paradise. To try and interpret its descent into hell. Another name struck off the list.

'Mainstream' journalists operating out of the quietly seething power cauldron of New Delhi have their own pet peeves. "How difficult it has become to access information!" we exclaim. We complain about social media trolling friends and colleagues. About unknown persons who show up on your WhatsApp (where do they get the number?) and send you strange videos. Or harangue you on email, asking "How did you write this? How dare you?" A vague but new sense of being shadowed.

For all that, sometimes it feels it's we who actually are the first predators. We pass off the borrowed valour and wisdom of those on the ground as our own. We are the ones who make those in the Valley who still talk to us—and believe me, the conversations are becoming fewer and far between—vulnerable. As I quickly go through a blog posted as part of a response to The New Indian Express's edit uploaded on Facebook, I realise the more we mourn Shujaat's killing, the more we claim him as a friend, the more he becomes a target of vilification from all sides—almost as if he was a metaphor for the state, or its malcontents. Not their interpreter. And now, their victim. They did not even wait for the earth on the grave to dry.

Shujaat was a sane, sensible and human node on the endlessly talkative and noisy networks of communication we inhabit—his Facebook posts gave us a space to engage, argue and debate, whether it was the Kathua incident or the ceasefire that has now, in a morbidly ironic twist, ended with his own shooting. Now, it appears as if this mode of free speech, this mode of being in conversation, was seen as his fault and held against him. Little things were gradually making him a pariah both inside and outside J&K... just how much, that we are coming to know only from his death. As one side paints it, enemy of nuance as they are, Shujaat could have been just an apologist for ISIS. Their very luridness of vision renders them largely unworthy of a response. And from the other side, there emanate dark hints of a sellout, of being on the take. Among other things, he wanted a lit fest in Srinagar. Yes, another
Machiavellian move by the State.

Another time, it would have been a point of passionate contention among Kashmiris. But now, it was part of a charge sheet of sorts.But why him, and that young Army man returning home for Eid? 'They' wanted the ceasefire to cease. A common friend, trudging back from Shujaat's funeral in his native Baramulla, tells me over several broken calls—broken as much due to the disturbed line as due to the disturbed minds, "You see, because of the ceasefire, NC and PDP could again start their political work, they wanted that to stop—mainstream politicians talking to the people." And Shujaat was seen as the most mainstream voice supporting it. And indeed, prospering. As I try to make sense of his words, he adds: "No one is in control of these people, there's lot of vengefulness, anger... extreme elements, out to kill all of us...."

I remember being assigned the foot soldier's job of covering the Hurriyat leaders' visit to Delhi on Prime Minister Vajpayee's invitation. Talking to us, Abdul Ghani Bhat had said he would rather talk to Advani (a hawk) than Vajpayee. He found it hard to negotiate Vajpayee's disarming way with words. And with a twinkle in his eyes, he added, "I also don't want to interact with Bengali girls (women journalists)!" That was directed at Anouhita Mazumdar (then in The Times of India) and me... "You ask too many difficult questions"! It was still possible then to ask questions of anyone... doors were not shut on your face.

Now, those who dare to engage with New Delhi, not the powerful but just the lesser mortals like us, are under a tangible threat. To Kashmir, one has lost two good friends—photojournalist Pradeep Bhatia and now Shujaat Bukhari—one as unexpectedly as the other. In these two deaths, a short history of troubled Kashmir lies before us. Perhaps just as much as those unmarked graves and half-widows. If there are victims in Kashmir (and God knows there are), count words among them. The corpses of words and meaningful conversations lie among the chinars. Shujaat meant many things, he was nurturing and helping young journalists, he was part of an NGO trying to explore ways to get the Kashmiri Pandits back, he was active in circles promoting literature, and most of all, he had access to all sides of the spectrum. That the guns simply could not allow. Someone sitting in their midst and plotting for peace!

Now we are on Telegram too. Follow us for updates
TAGS
chronicler Kashmir

I am ready to back Warner's ability and judgement, says Australia captain Finch

RBI remains laser-focused to bring back inflation to 4 per cent: Governor Das

Despite repeated natural calamities during monsoon, Kerala yet to set up flood warning system