In the excitement of unearthing probably a rare, real batting talent in Prithvi Shaw, let us not recreate a fantasy world in which Indian cricket is back on the rails and looking at a great future ahe 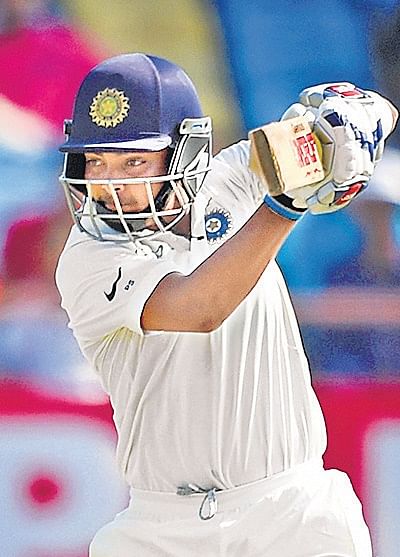 In the excitement of unearthing probably a rare, real batting talent in Prithvi Shaw, let us not recreate a fantasy world in which Indian cricket is back on the rails and looking at a great future ahead.There can be little doubt of a player’s ability when at 18, he scores a century on his Test debut with an elan and freedom that promises real greatness in times to come. The cherubic face masked in a helmet, executing punches through the covers with a pronounced bottom-handed grip, has made many a cricket fan nostalgic, reminding them of a time when Sachin Tendulkar was king of all that he surveyed. Similarities between the two may be just coincidental or pointers to wh­at lies ahead, no one can predi­ct at this stage. Shaw is a raw talent, who has at each significant step of his career scored a century, be it in Ranji Trophy, Duleep Trophy or now in a Test match.

When a new man steps on the centre stage and makes it his own, scrutinising eyes look for strengths as much as they search for flaws. Shaw’s self belief, hunger, desire and the fearless, str­o­k­e­ful execution of the talent he po­ss­esses at an age when most pl­­ayers are still learning and perfecting their skills in domestic cr­icket, are positive signs that th­is boy can have the world at his feet.

However, the very strengths he has could also be his flaws. The exaggerated back lift that allows him to strike the ball with refr­eshing freedom, the bottom-ha­nded grip that lets him hit with force all his horizontal bat shots, could create problems on more testing wickets as could his technique of playing the short ball. Will Shaw emulate the likes of Tendulkar, Rahul Dravid and VVS Laxman or like a majority of Indian batsmen thrive on these placid Indian tracks but perish without a trace on bouncier, se­eming tracks? And let us not forget Shaw has replaced in the te­am some prolific batsmen who have scored heavily at home but failed in places like South Africa and England. His real test will come and till then let him be and remind the star-crazy nation that this was a hundred scored against a modest attack in ideal batting conditions.

Shaw’s dazzling debut and hogging the headlines should not make us forget that this Indian te­am has been beaten on two away tours, its batting been brutally exposed and its aspiration to be called the best Indian side ever badly dented.

There are many questions that need addressing and sorting out. The Karun Nair issue is too troublesome to be left unanswered. In this present day and age, you don’t pick a player who proves himself by scoring a triple century, then keep him warming the bench and drop him all of a sudden. There has to be an explanati­on as on the face of it, this is extr­emely unfair on the player. There have been too many selection muddles in England and elsewh­ere which have put a question mark on the think-tank’s judgement. By simply saying that he does not decide on who is picked or not, skipper Virat Kohli can’t just wash his hands off from his own responsibility.

Finally, is playing a two-Test series against the West Indies the ri­ght preparation for Australia to­ur? Sure, the Indian team may get “morale boasting” wins and some of the batsm­en wi­ll sc­o­re runs by the tons, but will th­at he­lp their cause abroad? Obvio­u­s­ly not and that should be the worry.

Now we are on Telegram too. Follow us for updates
TAGS
Prithvi Shaw