Right noises from the left: Sabarimala normalcy puts CPM back in business

By refusing to oblige, the Left is making it tougher for the rivals.

Religion and logic have little in common. But, political logic demands that when it comes to religious beliefs, the faith of the people be given some serious consideration, even if it’s not in line with laws of reason. Surprisingly, the Communists of Kerala, believed to be ever tuned into the people’s pulse, didn’t know this and paid for the lapse with both their credibility and popularity. The ruling Left Front had to deal with massive protests, violence, loss of face and, more importantly, a near wipeout in elections after it decided to forcibly enforce the Supreme Court’s Sabarimala order that did away with faith-based restrictions on women’s entry last year. 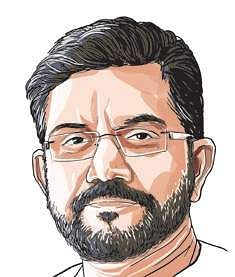 A year later, it turns out the Communists have learnt their lesson. Making a convenient use of the lack of clarity in the latest SC order, which sent the Sabarimala matter to a bigger bench, the CPM-run government decided to proactively prevent women in the restricted age group from trekking to the hill shrine.

The aggression it displayed last year, when it pursued its agenda of breaking the age-old taboo, was missing when the pilgrimage season opened last week, and though siding with the faith was more of a compulsion than choice, the CPM did indicate a shift instance that could prove useful in its battle to stay relevant.

As a result, an atmosphere of peace and piety has replaced the air of violence that surrounded the sacred hills a year ago, and the temple is witnessing a devotee surge. While the government should be happy about the spike in temple offerings and the near-normalcy with regard to the pilgrimage-linked economy, it must be ecstatic about the fact that it has deprived the opposition of a tool they so effectively used in the last elections. If the Congress-led UDF, which won 19 of 20 Lok Sabha seats in Kerala riding the Sabarimala sentiments, and the BJP, equally aggressive in efforts to exploit the emotions involved but less effective electorally, were expecting the CPM to blunder again, the comrades, wiser now, had a surprise in store. Don’t enforce the earlier order, warned both the Congress and the BJP excitedly after the latest court judgment. We won’t, thank you, said the CPM, stealing their thunder. What did the Left lose in the bargain? Minor damage to its image maybe, but nothing that can’t be repaired. What did it gain? Too early to gauge but it was certainly a step towards regaining the trust of the believers. After all, the Left depends primarily on Kerala’s secular Hindu votes for its survival.

Parity on Sabarimala has put the Left back in business. The outcome of the recent by-elections in six Assembly seats proved that the Left has managed to reclaim some of the lost ground. It won three seats – all previously held by the UDF. One of them was Konni. Located in the same Pathanamthitta district as the hills housing the Ayyappa Temple, Konni saw an upsurge of emotions during the Sabarimala agitation. Another was Vattiyoorkavu, a Hindu-majority constituency that should have been a cakewalk for the Congress given the perceived anger among the majority against the Left, and the open call from the leadership of the dominant Nair caste to back the UDF.

What that means is the UDF can no longer be sure of its victory in the 2021 state elections, and the BJP of increasing its tally.
What also seems to be helping the Left is the stand taken by the government on Maoist extremism and Islamic fundamentalism, almost at variance with that of the party brass.
It stood firm when it had to deal with allegations of rights violations and abuse of power after police recently killed four Maoists and arrested two college students for extremist links. Even when the CPM leadership expressed reservations, Chief Minister Pinarayi Vijayan stood his ground and backed his police force.

Now we are on Telegram too. Follow us for updates
TAGS
LDF BJP CPM UDF Kerala Sabarimala