News anchors donned army fatigues and helmets and totted toy guns as they worked up a froth to keep their audiences glued.

The undisputed victors of the Balakot skirmish with Pakistan are our Hindi news broadcasters. Normally, news channels register a viewership of around one-fourth of the Hindi general entertainment channels (GECs). But on the day our planes crossed the border and bombed Pakistan on February 26; and again when captured pilot Abhinandan Varthaman returned home on March 1, news dominated over everything else.

Sample this: On the day of the Balakot strike, top-performing Hindi news channel Aaj Tak recorded 96.8 million ‘impressions’ or views compared to the top entertainment channel of the day, Zee Anmol, which got 96 million views (Broadcast Audience Research Council data). On March 1, the day when Wing Commander Abhinandan was released, Aaj Tak and ABP News performed brilliantly with 130.4 million and 90.5 million ‘views’ respectively, while the best of the Hindi GECs Star Utsav barely managed 11.5 million ‘impressions’. 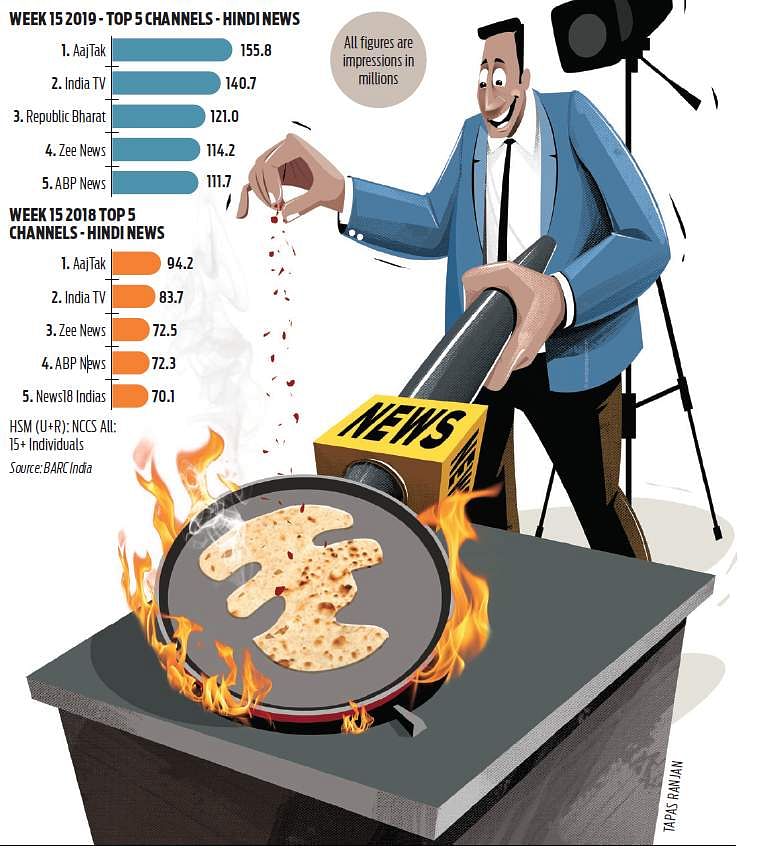 It must be mentioned that the period under review saw a face-off between cable TV platforms and the government regulator TRAI (Telecom Regulatory Authority of India) over pricing issues, leading to many entertainment channels being pulled off and not being available for viewing.

The high viewership came at the cost of good journalism as most news channels became war rooms of ‘nationalist’ hysteria. News anchors donned army fatigues and helmets and totted toy guns as they worked up a froth to keep their audiences glued.

Pulwama and Balakot have continued as a theme in the election propaganda of many parties, and the news channels are only too happy to keep the war discourse going so long as the spike in viewership continues. For instance, this calendar year’s week 13 starting end-March, Aaj Tak garnered a total viewership of 168.9 million as compared to just 97.7 million ‘impressions’ during the same week a year ago in calendar year 2018. Similarly, the No 2, India TV, got 141.8 million views for week 13 this year compared to last year’s 85.5 million. (BARC – Hindi speaking markets – 15+).

All this is got to do with hard economics. With political parties expected to pump in more than Rs 50,000 crore for the Lok Sabha polls, the news channels are expecting to skim off Rs 800-1,000 crore in ad revenue and ‘informal’ promotions. After all, elections don’t happen every day.

The theatre of the absurd enacted by news networks starting with the Pulwama tragedy has many reasons; but it is also a sign of economic distress in news broadcasting. It is a desperate attempt to hang on to audiences increasingly migrating to digital and other OTT platforms in search of newer entertainment content.

LOSSES MOUNT
The task isn’t easy. There are nearly 400 licensed news channels with about 200 on air. In the crowded marketplace, the only source of revenue is advertising as most channels don’t charge subscription fees. And advertisers are tight-fisted. A recent FICCI-Ernst & Young report shows that overall ad spends on television over calendar year 2019 will be around Rs 28,000 crore; and news channels will garner only a 13 per cent share of this pie amounting to just Rs 3,640 crore.

Let’s look at the financials of some of the TV networks. Frontrunner TV Today (part of the India Today group) grew revenues to Rs 731 crore in FY 2018 from Rs 682 in the previous year, barely a 7 per cent growth; and increased net profit 16 per cent to Rs 119 crore from Rs 102 crore in the same period.

If this is the state of the best and oldest of the news networks, one can well imagine the state of the smaller, unlisted entities. The irony is if you compete with the entertainment channels for a piece of the advertising cake, you begin looking like them.

News is about truth, and about ethics, and news networks will have to insulate themselves from the rat race for eyeballs-at-any-cost if they want to be known for credibility.

Now we are on Telegram too. Follow us for updates
TAGS
pakistan Hindi TRAI