Slowdown and the perils of #hashtag economics

In the 1840s, Claude Frédéric Bastiat, thinker and economist, wrote a seminal essay, Petition of the Candle-makers.

In the 1840s, Claude Frédéric Bastiat, thinker and economist, wrote a seminal essay, Petition of the Candle-makers.  Deploying satire in a fictitious petition to the lawmakers, Bastiat stated that candle-makers are “subjected to the intolerable competition” of sunlight, and how it had reduced the candle industry “to a state of complete stagnation”. The solution to revive the fortunes of candle-makers, he mooted sardonically, was “to pass a law, whereby shall be directed the shutting up of windows, dormers, skylights” to enable “shutting out as much as possible all access to natural light” and “thus create the necessity for artificial light” to drive demand and the multiplier effect for growth.

The essays Bastiat wrote were aimed at mocking/exposing many popular, ideological and influential economic fallacies—which prevailed then and continue to prevail now. They also illustrate the distortionary potential of misplaced notions, the impact of voodoo politics on the economy and the perils of short-termism. Ever since the slowdown in the economy has come to be accepted—a reality visible since many quarters, but evaded consistently—there has been a rash of ideas from within and outside the government to revive the it. The policy air is being pollinated with theories—many of which have the scent of the candle-makers’ petition and reek of absurdity. The ‘let us do something’ affliction has triggered a string of suggestions from abandoning fiscal restraint to lower interest rates to a weaker rupee—one market player put the ideal level as low as `72 per dollar. It is as if costs and consequences do not matter. 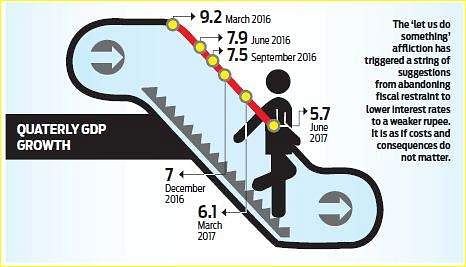 There is the promotion of #hashtag economics and then there is the alt theories/facts universe represented by the all will be well, ‘it is only a matter of a couple of quarters’ approach that rests the blame for the slowdown on pile up of NPAs and disruptive events. Yes, demonetisation and GST have hurt growth, but these are aggravating factors. NPAs can at best be a three-legged alibi—even assuming 70 per cent of banking represented by Public Sector Banks is in ICU, fact is that the rest 30 per cent are chasing retail borrowers because big-tag bankable projects are hard to come by.

There is much talk about a stimulus package, and various numbers are being thrown around. The consensus figure of `50,000 crore or $7.8 billion, it could be argued, is not exactly substantial for the `135 lakh crore or $2 trillion economy. The criticality here is affordability —the headroom for expansion. Be that as it may, the question is where the stimulus will be deployed, what the objectives and the promised outcomes are. Talking points in the narrative suggests it is being deployed for recapitalisation of banks, exports sops and so on.

Yes, the steps may alleviate some pain and improve sentiments in segments, but expansionist ideas have also triggered worries—about debt and deficit among policy makers and value destruction in the equity markets. Reviving the economy demands confidence-building measures; and yes, optics and headlines matter. The moot point is whether denting and painting will suffice? The slowdown in gross domestic growth reflected across six quarters represents a long-term risk to social and political stability. This could be further imperiled by adoption of faux sanguine short-term approach. The nub of the slowdown is essentially about lower consumption, sliding demand, falling investments, poor job creation and growth.

The cause of the slowdown in the economy is complex, straddling multiple layers of causatives—frequently, the consequence and cause morph vitiating demand deflation across sectors. The circumstance calls for a deep and detailed analysis of the rigidities that detain growth, it calls for recognition of what can be seen and acceptance of that which cannot be.

The big elephant in the discourse is the distress in the rural economy—encompassing both the farm and non-farm segments. One can wade through data on size of holdings, yield, incomes, besides the controls over pricing and access to markets. Or, one can simply judge from the number of farmers’ agitations, the cries for loan waivers and the clamour for caste-based reservation in education and for jobs across land-holding classes—Marathas in Maharashtra, Patels in Gujarat, Jats in North Indian states.
Contiguous to the distress in agriculture is the issue of shrinking opportunities for wage-earning unskilled labour. The bulk of the circular migration in India is that of farm labour—seeking seasonal daily-wage employment in semi-urban and urban India in low-skilled jobs. That opportunity has shrunk for multiple reasons. A recent report by rating agency, Crisil, shows that sectors with most capacity to absorb labour—construction, mining and manufacturing—have suffered for demand leading to shaving of employment growth.

Exports accounted for over 20 per cent of the GDP in recent times. The slowdown, which has hurt industrial growth and employment, symbolises a far bigger issue is at play. The clue is located in trade data on products and components being imported, particularly from China—how many jobs and how much of demand is being exported. It explains in part demand deflation for Indian products and more importantly reflects the state of competitiveness of the economy.The slowdown is a symptom of deep-rooted problems in the super structure. These range from rabid regulations that deny farmers access to markets, to the usurious credit landscape crippling the viability of farmers and the SME sector, to the omnipotent permission raj that detains investment and the persistence of inspector raj.

Fixing the economy is a bit like cracking the Rubik’s puzzle—aligning opportunities, factors of productivity and regulations. The key to revival lies in understanding the opportunity for growth in the domestic economy, in resolving the many issues that haunt the people —for instance housing, mass transport, waste management, potable water in rural India, services such as public health and education. Resolution of these problems will create room for investment and job creation.  The learning from success in resolving issues of scale and complexity could open up opportunities in the global mart.

There is no dearth of theories on how to revive economic growth. The underlying principles are essentially about leveraging of opportunity and enshrinement of efficiency—in the private sector and in government. Typically, the political urge is to find quick fixes. These may deliver tactical gains, but could engender strategic blunders—the fallout of the quality and quantity of the 2009 stimulus package is an illustrative lesson. Ergo, what not to do is as critical as what to do.  shankkar.aiyar@gmail.com

Stay up to date on all the latest Shankkar Aiyar news with The New Indian Express App. Download now