The airline’s troubles are not recent—it has been struggling in the red for over five years and its net worth has been persistently negative.

The aviation industry in India follows a pattern best illustrated by the titles of Salman Khan starrers. When the going is good, the airlines are Dabangg, when fuel prices rise, when traffic and revenues dip, they seek a Bodyguard, and when it all fails, they end up Wanted.

The sordid saga of Jet Airways fits the script and is a sequel to Kingfisher Airlines, starring Vijay Mallya. Exuberance leads to myopic mergers and acquisitions on dubious rationale, and post facto justifications trigger a parade of blunders. In good times, revenues grow in arithmetic proportion, and in bad times, losses grow in geometric proportion. Maintaining altitude demands a balance of costs and pricing. Lack of a cogent approach results in a frantic race for survival. 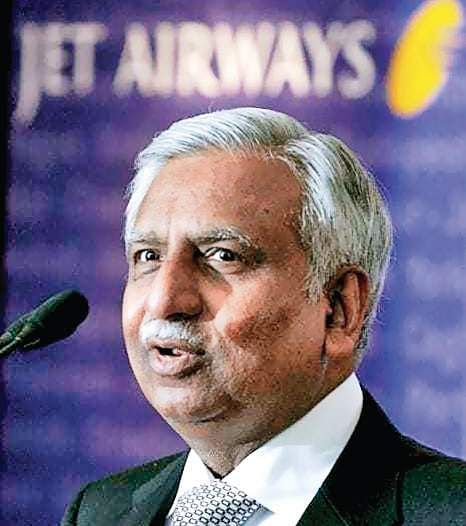 The curious facet about the Jet Airways story is that despite its beleaguered state, there is no urgency on resolving the issue. Rather, the case is in a sort of suspended animation. Indeed, Jet Airways is afflicted by an ailment that has no name. The Naresh Goyal enterprise owes Rs 9,610 crore in debt, has declared a negative net worth of Rs 10,370 crore, and for the nine-month period ending December 2018, has reported a loss of Rs 3,208 crore—a dip of 1,295.4 per cent compared to the previous year, a company presentation helpfully points out. Those it owes money include banks, sundry operational creditors, aircraft lessors, fuel suppliers and the Airports Authority of India—airlines owe AAI over Rs 2,400 crore in dues.

The situation for those running the operations is desperate. In February, the shareholders of Jet Airways passed a resolution offering SBI and others conversion of debt into equity at Rs 1 per share—which translates into 50.1 per cent shareholding. What happens if a lenders’ consortium led by State Bank of India ends up owning a major chunk of Jet Airways equity? Would that be virtual nationalisation? Definitions aside, there is no escaping the fact that banks are now left holding Air India II.

The airline’s troubles are not recent—it has been struggling in the red for over five years and its net worth has been persistently negative. The entry of Etihad in 2013 via the sale of equity by Goyal was backed by expectations of funnelling traffic from India on the Etihad stream. However, curiously, Jet Airways entered into code-sharing and traffic sharing deals with European carriers like Air France et al. That bet left Etihad fuming. Worse it didn’t quite pay off.

Proposals from other airlines for co-management were rejected as Goyal would not step down. A plea to Tatas to take over didn’t fructify either. A top financial adviser pointed out to the Tatas that a stable of three different airlines—Air Asia, Vistara and Jet—would be akin to a cart being drawn by a donkey, a horse and a white elephant. In 2019, the lenders are desperate but cannot run the airline. So the hope is back on Etihad. The once bitten Abu Dhabi-based airline has imposed conditions and sought concessions. There is a mystifying fog over the fate of the airline, which turns 25 years this year. The silver jubilee stands tarred.

There are consequences to leaving an enterprise of this size stalled in a fog. Jet and Jet Lite flew over 30 million passengers to domestic and international destinations. There is the cost to the lenders, the cost of systemic disruption and the political cost of threat to employment. In the past few weeks, over 50 aircraft of its 119-strong fleet have been grounded. In recent days, the airline has announced cancellation of nearly 500 flights till March 30, 2019. Passengers travelling on work and holiday are left stranded every day thanks to the uncertainty. Those stuck with Jet bookings are left in suspense on the status of their planned and paid for journey. The holiday plans of families, to travel for a marriage in the family or for that long-awaited holiday, are in tatters. While the future is yet uncertain, the airline offers tickets on its sites to destinations from April onwards, setting into motion another parade of angst and anger.

The implications on the employment front are grave – particularly in the run-up to the 2019 polls, already surcharged with claims and counterclaims on employment creation and joblessness. The headcount is not small, with 16,000 jobs at stake -- already staffers awaiting salaries for months are worrying about their future. There is also the threat to indirect employment of over 35,000, assuming a 2X ratio.

Whichever way one looks at it, the very public unravelling of the enterprise is reminiscent of the past, the saga of Air India and Kingfisher Airlines. There is no denying poor governance –particularly in a business with high cash flows. Equally, the sequels illustrate how vegetating policy and misplaced notions of what constitutes strategic interest left the sector episodically chasing its tail. Consider this: Passenger traffic rose from 68.4 million in 2009-09 to 103.7 million in 2013-14, and to 183.9 million in 2017-18. Clearly there is no dearth of demand and of growth in traffic. Yet three airlines have crashed into the red in the period.Can India afford three Mayday calls in less than a decade in a critical sector?