What do politicians worry the most about? The pithy answer ‘‘Events, dear boy, events’ is of unknown origin and is a quote in search of an author. And Donald J Trump may well consider filing for adoption rights.Buoyed by a prosperity boom Trump was coasting towards re-election for a second term till the advent of the event — the pandemic — upturned his cart. For months, Trump railed against attempts to let the pandemic define his presidency — perpetuating denial and untold tragedies. On Thursday, Trump and his wife Melania tested positive for COVID-19.

Thus far almost every major poll is predicting a victory for Joe Biden over Donald J Trump. Polling data reveals the margins of Biden’s lead over Trump are wide — six points as per the forecast by FiveThirtyEight, seven points as per CNBC/Change Research and eight points as per USC/Dornsife. The Economist/YouGov rates the chances of a Biden victory at 8 of 9 versus one in 10 for Trump.

No pollster is ruling out a Trump triumph though. Pollsters data show 94 per cent of those who voted for him in 2016 claim they would vote for him again. Facts matter — the promised wall is three miles long, the trade deficit, particularly with China, is just as bad, Obamacare is yet alive. Folklore and Fakelore it would seem matter more — for Trump supporters the idyll of ideas, a conservative majority in the Supreme Court or for that matter just the vague notion and promise to ‘Make America Great Again’. 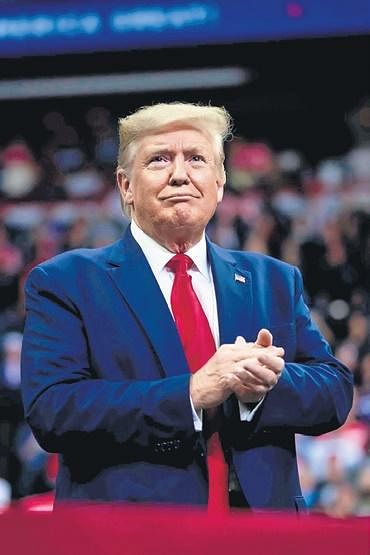 The Democrats, somewhat like India’s Congress party, whose leaders in the run up to the 2019 parliamentary polls were tabulating how many seats the BJP would fall short of majority, tend to conflate coincidence with causation and consequence. Arguably, the unfiltered view of whimsical volatility within the Trump administration surfacing through book excerpts, the narrative in the mainstream media, and the reality of angst among the oppressed carry the potential of electoral consequences. That though is not a ‘given’ — the algebra of electoral math though has been frequently overtaken by political chemistry.

Prima facie, the abject failure of the world’s richest and most powerful nation to manage the pandemic is reflected in the continuing wave of cases and deaths — over 7.3 million cases and over 208,000 deaths as of Friday. The employment scenario migrated from payroll protected furloughs to permanent job losses — the US economy is estimated to have recovered only 11 million of the 23 million lost in April. Race relations are said to be at the worst since the late sixties.

Trump though has kept his voter base engaged and secure with weaponised phraseology. His standard response to facts, whether it is deaths, deficit, deception on taxes, has been consistent– dub it all as fake news. He has also leveraged fear to consolidate his votes. Like it or not, the campaign to defund the police sent shivers up the spines of those who have invested in a life in the leafy suburbs. Trump’s slogan on law and order, derived from the Nixon campaign, has a ring to it among those who have a lot to lose if the violent protests persist and if the police are defunded.

Biden’s success depends much on how many of the Trump Democrats he is able to woo back and whether the invocation of the Biden Conservatives has had any impact. The orbital shift requires Biden to score victories in critical states. Ohio, the location of the first Presidential Debate, is considered as the test market for business and politics. Biden must win it to clinch the polls. In 2018 despite their good showing, Democrats won only 4 of the 16 Congressional seats and, in 2020, Biden is yet to nudge past Trump.  There is a certain resonance to a popular and baffling truism – Trump’s supporters believe in him even if they do not believe everything he says. They take him seriously and are not naïve to take him literally. He has over 90 per cent approval rating among Republicans.

In the best of times, prediction in any US Presidential poll is tricky and perilous. First, any poll predicting the winner of popular votes can go wrong. Second, even if the prediction of popular vote holds up, there is the eventuality that the winner of the popular vote may not aggregate the necessary numbers in the Electoral College — as indeed happened in 2016 with Hillary Clinton or in 2000 with Al Gore. Trump’s chilling refusal to assure smooth transfer of power added a new variable in the complexity of outcomes.

On Friday evening, the US President was hospitalised. The event now occupies prime time space previously devoted to utterances, machinations and allegations. As air time is dotted with opinion and funereal speculation, as brutal memes about the Karma of Corona spews on social media timelines, a new hypothesis has sprouted — will voter antipathy morph into sympathy?
The parade of events is testing the world’s oldest democracy.

Now we are on Telegram too. Follow us for updates
TAGS
US polls US 2020 polls donald trump Joe Biden