The winds of change are blowing, ever not so gently, over 24, Akbar Road—the white, leafy Lutyens edifice that has served as the headquarters of the Congress party for over four decades.

The winds of change are blowing, ever not so gently, over 24, Akbar Road—the white, leafy Lutyens edifice that has served as the headquarters of the Congress party for over four decades. And it is not just the nameplate hanging outside the door of the largest room at the centre of the bungalow that has changed. The fresh smell and feel of the renovated building gives the impression that the Grand Old Party is gearing up for a modern identity under its new president, Rahul Gandhi. Most of the rooms have new paint and occupants. If the emerging blueprint of the future contours of the organization is any indication, Mr G will be embarking on a massive disruptive exercise to offer India a Rahul Congress; a party with the same flag and symbol while the difference lies in its composition and ideology.

If aides and invisible advisors are to be trusted, he believes that the slow and steady always wins the race. And he seems to be inspired by Prime Minister’s Narendra Modi’s obsession with alliterations. The Congress boss has chosen three Ds to re-float his sinking ship—Democratise, Delegate, Deliver. The AICC session in mid-March will mark the laying of the foundation of a new Congress.As part of his Operation Revive and Rejuvenate Congress, Mr G has placed a premium on party unity at all levels—make frenemies and influence people is his new mantra. Over two decades, the party has been riddled with factions in almost every state, with local satraps either leaving to join the BJP or pushing others to look elsewhere. 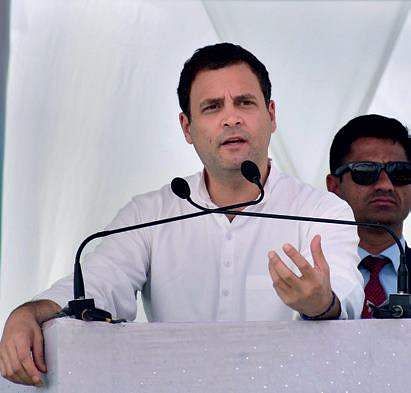 In two years, it has lost numerous leaders and even a state government to defections. From an institution that ruled over half the states five years ago, the Congress has been confined to four tiny ones. Rahul has conveyed to all leaders that he will not tolerate cliques, schisms and personality clashes, which have ruined the organization at the grassroots level. This directive has been bearing fruit in almost every state. For the first time after five years, Delhi Pradesh Congress President Ajay Maken was seen in the company of sworn rival and former Chief Minister Sheila Dixit; he had been told in no uncertain terms to involve all former leaders in decisions and conduct ghar wapsi for those who had left the Congress recently. In Madhya Pradesh, Mr G had instructed factional leaders such as former Union Ministers Kamal Nath, Jyotiraditya Scindia and Digvijaya Singh, along with state office-bearers, to campaign in sync for the Assembly by-elections.

Sure enough, Scindia and Nath were seen riding together in the same jeep. In election-bound Karnataka, the Congress president has ensured that all former chief ministers and party chiefs work under Chief Minister Siddaramaiah’s leadership so that the party can win for a second consecutive time. In his home state Uttar Pradesh, Mr G has chosen a different strategy—expansion through mergers and acquisitions. The Congress inducted the powerful Muslim leader Nasimuddin Siddiqui, a former Mayawati aide, as Rahul soothed dissenting Congress leaders. In West Bengal, Tamil Nadu, Kerala, Andhra Pradesh and Bihar, leaders have been directed to sort out their differences within three months.

According to insiders, Mr G is spending more time setting his house in order in states where the party is in direct contest with the BJP, leaving the rest to the regional parties. With the country going into election mode over the next 15 months, Rahul has decided to forge a united and refurbished Congress as the alternative to the saffron juggernaut. Brushing aside cobwebs of inaction, he has decided to hold elections for all party posts. Now all members of the Congress Working Committee, state chiefs and officers of frontal units like the Youth Congress and National Students Union of India will have to face organisational polls. Once elected, they will be given full authority to choose their teams and draw up their own action plans at the local level.

Mr G has realised that the organisation gradually crumbled over the ten years the party was in power. Sonia had maintained the status quo by retaining the old guard in key positions without inducting fresh blood. In 1984, her husband Rajiv Gandhi became the Congress president and the Prime Minister under tragic circumstances. He brought in fresh faces and ideas, making systemic changes in the governance with the slogan ‘Taking India to the 21st century.” Five years later, he lost the general elections because his party couldn’t effectively counter corruption charges against him. In the process, the Congress lost both the plot and the government.

However, his assassination catapulted it back to power with P V Narasimha Rao taking over as the Prime Minister and the party chief. Rao concentrated on purging the pro-Sonia elements rather than reviving the moribund outfit. Even the core ideology of the GoP has dissipated. Though it propped up minority governments at the Centre, it remained in the political wildness for eight years until 2004, after which it chose to luxuriate in the selfish spoils of government perquisites rather than remove the multiplying maggots of discontent within.

Since Rahul is yet to be a formidable alternative to Modi, the Congress sales pitch is to offer the people an alternative party led by a younger leader to exploit the dent in Modi’s popularity made by various multi-crore rupee scams. The BJP has instructed its workers to seek Mandate 2019 in the name of the Prime Minister. And the Congress has decided to tar him with the black brush of graft. Meanwhile, its ideologues are busy polishing the party’s image with gloss and glee. Since ideological inflexibility landed it in such dire straits, the GoP is likely to adopt the Situational Compatibility Principle by changing its stance according to the circumstances.

The party has been hitherto seen as a left of centre outfit. Mr G’s new Congress will inch towards the centre from the left and adopt prudent secularism to fight the highly motivated right-wing BJP. The Congress feels it will pay to stand in the centre in order to move either way and take the Centre and the centre stage away from Modi. After all, in new politics, conviction is a matter of convenience and calculation.

Stay up to date on all the latest Prabhu Chawla news with The New Indian Express App. Download now