Yoga is the new religion. It is India’s patented art of wellbeing, untouched by the toxic taint of communalism.

Yoga is the new religion. It is India’s patented art of wellbeing, untouched by the toxic taint of communalism. Elitist liberals, too, are yoga groupies everywhere, being politically correct aficionados of the alternate lifestyle. Yoga is also a powerful networking tool to acquire wealth and health. Promoters who teach and preach it have realised the mammoth potential of this spiritually-imbued physical exercise regimen to make them rich and famous. Though yoga is the soul of India’s 5,000-year-old heritage, it has acquired its widest global acceptability and respectability in the Age of Modi. Today’s yoga gurus have more chutzpah than the saffron-clad saints of the past.

Most of them are well-educated, powerfully-connected and well-versed in teaching followers the disciplined way to wellness. They aren’t the type to stay in forest glades or meditate on remote mountaintops, expecting their minions to trudge to their doorstep in search of mojo and moksha. New Age gurus are adopting every trick in the corporate trade to become ultra-visible and influential by courting the high and mighty in the political establishment. Last weekend, Coimbatore-based Isha Foundation, founded by 59-year-old Jaggi Vasudev, invited Prime Minister Narendra Modi to unveil a 112-foot tall statue of the yogic version of Lord Shiva, Adiyogi, considered the first of Bharat’s yoga masters. 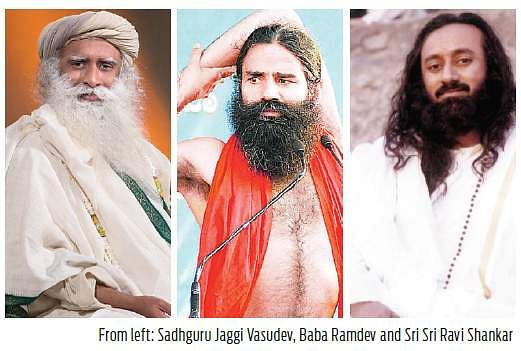 Modi, who practices his asanas unfailingly, spoke about yoga’s virtues to an impressive 50,000-strong gathering from all over the country, including the silk stockings from India’s urban playgrounds. Modi viewed the event as an endorsement of ancient India’s art of uniting humanity. But for Brand Sadhguru, the PM’s presence for a mere couple of hours was a turbo boost. The maverick mystic, who loves his golf and gurudom equally, is famous as an Indian yogi, Padma Vibhushan awardee and New York Times bestselling author. His foundation has over seven million followers worldwide. But he doesn’t promote yoga as just another physical regimen. “Offering yoga as a science of transformation, as a science towards one’s liberation is the basis objective of Isha,” he claims. It was obvious from the ambience of the event that Sadhguru wasn’t merely celebrating Shivratri.

He was marketing the peace-seeker’s perfect paradise set amidst verdant forests in the foothills of the Western Ghats as a refuge from tension and conflicts. The foundation and its mystic founder have been working to make the Adiyogi project a huge success for the past 30 months.
Sadhguru is one of the most visible faces of India’s burgeoning club of spiritual entrepreneurs, who complement, yet compete with each another to sell versions of the ancient art or yoga-inspired products to hordes of the fitness obsessed. Over 100 of them are active in various parts of the country, running yoga classes and institutes. Thanks to their aggressive retail and persuasive skills, yoga is now practiced in over 150 countries—including even a few Islamic nations.

With profit margins going north, all are seeking official endorsement to expand their markets. They have made big plans to extend operations beyond a state, refusing to confine themselves to pure yoga. After the southern event, the Isha Foundation plans to install 112-foot tall visages of Adiyogi in all three remaining directions. “We want to place these tall faces of Adiyogi in four corners of the country. The first one is in the south, at the Isha Yoga Centre, Coimbatore. The eastern one will most likely be in Varanasi. For the north, it will be somewhere north of Delhi and the western one will be in Mumbai,” Vasudev said. However, the success of his enterprise depends on Isha Foundation getting cheap land from the government and largesse from invisible donors, similar to political fund raising.

Sadhguru’s spiritual brethren, Sri Sri Ravi Shankar and Baba Ramdev are the two other faces of India’s powerful yoga trinity. Though both are avowedly apolitical, they are more comfortable with the ruling dispensation than other yoga maestros, and are rarely seen with opposition leaders. They make it a point to ensure the presence of the prime minister, prominent chief ministers and Union ministers at all important functions. For example, almost all the BJP chief ministers have visited Baba Ramdev’s Patanjali Establishment in Uttarakhand. Modi himself has attended its important celebrations. Even a few opposition leaders have been invited by Ramdev to support his spiritual ventures.

All the three depend on government largesse for land and tax concessions. Both Sri Sri and Ramdev mentor the commercial ventures of their foundations and trusts. Ramdev’s aide Acharya Balkrishna has made it to Forbes’ annual list of India’s top 100 richest tycoons. The co-founder of Patanjali Ayurved, whose net worth is $2.5 billion (nearly Rs 16,000 crore), was ranked 48th. Patanjali products are giving established MNCs a run for their money with quality and product advantage. Ramdev is the glad recipient of subsidised land from the state government for the purpose of setting up food plants. The diversity of profiles shows the unity of the yoga principle. Ramdev’s followers are confined to the cow belt and mostly from the lower and middle classes while those of Sadhguru and Sri Sri are upmarket citizens of the world. Yet, Sri Sri needed Modi’s inaugural presence to make his signature event, The Art of Living’s World Culture Festival on the banks of Yamuna in Delhi, a success. It was attended by over half-a-million people from India and overseas.

India’s past is pervasive with spiritual leaders who played important roles in politics and business. The Guru of the Beatles, Mahesh Yogi and the Sex&Drugs&Rock&Roll master Rajneesh created their own flocks but rarely sought political patronage. Sathya Sai Baba was one of India’s most holy and powerful religious leaders, whose blessings were sought by prime ministers, chief ministers and sports icons like Sachin Tendulkar. But the New Age troika of Sadhguru, Ramdev and Sri Sri leverage political patronage to catapult themselves as spiritualpreneurs who make the relationship between the puja of politics and the science of religion respectable and mutually rewarding.