RSS ends isolation to project its own India

Isolation petrifies ideas even as ideology is the Petri dish of ideation.

Isolation petrifies ideas even as ideology is the Petri dish of ideation. The self-imposed solitude of the 93-year-old Rashtriya Swayamsevak Sangh has yielded no mystique but has at best generated curiosity and at worst, demonisation. This stark reality has dawned on RSS chief Dr Mohanrao Bhagwat. Come Monday, for a total of six hours over three days he will speak on “Bhavishya Ka Bharat” (India of the Future) to over 1,000 prominent citizens from across the national spectrum at Vigyan Bhawan, New Delhi, to start a meaningful dialogue between the powerful and the hopeful.

For the first time in its history, the ideological citadel of Hindutva is letting the drawbridge down to engage elements hostile not only to what it represents but its very existence. Bhagwat’s strategy is clever and innovative—inventing a new rule of engagement by sending out informal feelers through non-political contacts to top political leaders of the public canvas from the Congress to the CPM. The RSS has also invited heads of religious organisations, including Muslims, Christians, Sikhs and other sects. 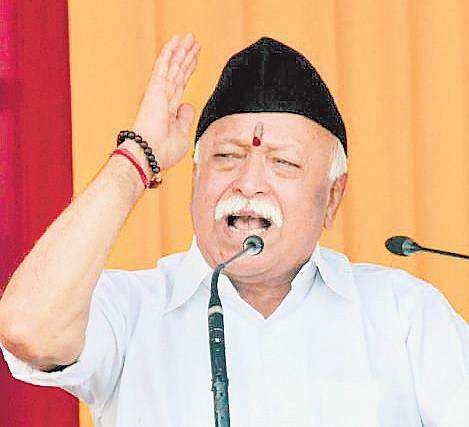 Stung by the aggressive attack led by Rahul Gandhi for the past few months, its game plan is to elaborate its stand on contentious issues such as cow vigilantism and lynching, Jammu and Kashmir, Ayodhya, Article 370, women’s empowerment, education, culture, and also the Modi government’s mark sheet. Since the RSS has been the whipping boy of sections of the foreign media, it has invited heads of over 100 foreign missions in New Delhi to the meet.

Since an ideologically compatible government rules at the Centre and in over two-third of the states, it couldn’t have found a better time and opportunity to counter critics and convey its message in loud and clear octaves. With elections round the corner, most non-BJP leaders and secularists may turn down the overtures. But the saffron mother ship has shown its openness to debate and dialogue over its character and activities.  So far, no other national organisation with a semi-political and substantial socio-cultural agenda has made such an attempt to capture the national spirit and define the contemporary narrative.

Because the RSS is seen as an organization of the Hindus, by the Hindus and only for the Hindus, its leadership has decided to define its real DNA. Bhagwat is likely to reiterate it doesn’t classify the Hindu as faith-inclusive but as an idea that ensures unity in diversity. The outfit has never been defensive about its commitment to Hindutva. Bhagwat is expected to build his central theme around the twin ellipses of vision and mission.

The RSS website prominently and proudly claims, “A unique phenomenon in the history of Bharat in the twentieth century is the birth and unceasing growth of Rashtriya Swayamsevak Sangh (RSS). The Sangh’s sphere of influence has been spreading far and wide, not only inside Bharat but also abroad, like the radiance of a many-splendoured diamond. Sangh-inspired institutions and movements today form a strong presence in social, cultural, educational, labour, developmental, political and other fields of nationalist endeavour. Sangh-initiated movements—be they social-reformist or anti-secessionist—evoke a ready response and approbation from the common multitudes as well as from vast numbers of the elite of different shades. It has increasingly been recognized that the Sangh is not a mere reaction to one or another social or political aberration. It represents a corpus of thought and action firmly rooted in genuine nationalism and in the age-old tradition of this country.”

It is obvious the RSS does not confine India to geographical borders but emphasises Bharat is India’s unifying cultural identity. For over nine decades, its cadres and communicators have grown as Bharatiyas, not Anglophiles.

At next week’s saffron summit, Bhagwat is determined to project the RSS notion of Bharat. Since independence, it has been abhorred by a large section of the media and Left-liberals as a body that abjures inclusiveness, democratic dialogue and minority rights. It is accused of propelling India towards a finite Hindu nation where other religious beliefs are redundant. It is accused of ignoring ‘the stake of women and interfering with the cultural right of Indians to eat and wear what they want.

RSS baiters argue it advocates majoritarianism in all spheres of Indian society. It is charged with infiltrating institutions, from the judiciary to academia, and even NGOs to eject contrarian and liberal elements.  Despite such acerbic attacks, it has grown phenomenally during the past five decades. Its swayamsewaks now hold the top four constitutional posts of President, Vice President, Prime Minister and Lok Sabha speaker. They occupy 20 Raj Bhawans.

Eighteen of them are chief ministers. Half the Union Cabinet comprises RSS members. The political initiation of over 1,000 MLAs and 250 MPs has been through the RSS. About a million Indians daily attend over 55,000 shakhas across the country. Its 500-odd frontal organizations manage colleges, schools, media, hospitals, and tribal and Dalit NGOs. Ten thousand full-time pracharaks are active in politics, culture and various think tanks at home and abroad.

With such an enviable pan-India presence, the RSS now is moving with the times. Previously it wasn’t concerned much about expanding its outreach to traditional foes. But when Bhagwat took over as chief in 2009, it decided to open itself to others. Till 2000, it restricted its connect to holding regular shakhas and local functions where prominent citizens were invited to speak.

Tata Group mentor Ratan Tata visited the RSS headquarters in December 2016. But non-partisan political leaders were rarely invited. Last year it broke with tradition, inviting former president Pranab Mukherjee as the chief guest at the annual function in Nagpur, thereby creating a political storm.  Moreover, the saffron monolith has abandoned its ‘No Publicity’ philosophy, opting for wide visibility and even scrutiny of its help and rescue efforts during the Kerala floods and its work in fields like education and health.

The high-powered Vigyan Bhawan meet will articulate the message that the RSS doesn’t need the BJP to defend or promote it. The BJP has so far been unable to define the contours of New India with a suitable ideological vocabulary. Now, Bhagwat will fulfil the long-standing RSS dream, since 1925, of unfurling the real identity and idea of Bharat. It won’t be a surprise if the Sangh Parivar’s opponents find fundamental faults in Bhagwat’s India of the future to eclipse Modi’s New India package in 2019.