This cacophony of business, medical and political voices is blotting out the utter failure of the establishment to lay out a health road map to husband the present and midwife a better future.

No. Wilde hasn’t gone wild in the modern context, perish the thought amidst pandemic peril. Not expecting the unexpected is the banal bane of the modern intellect.

As COVID-19 cuts a large swathe through 210 countries, infecting over two million people and killing over 150,000, it’s obvious that not only were global scientists, academics, economists and medical experts unable to predict the calamity, they also let humanity down — their fake genius was unable to find a workable prescription.

On newspapers and TV channels, cardiologists have turned into virologists, economists talk about mental stress and dermatologists wax eloquent about breathlessness.

Even path lab owners have become wise experts on the idiot box, suggesting ways and means to contain the disease.

This cacophony of business, medical and political voices is blotting out the utter failure of the establishment to lay out a health road map to husband the present and midwife a better future. It is perniciously piquant that the number of pandemic predictors is legion. Former US President George W Bush was one.

So was Bill Gates. In India, Contagion Cassandras from a ten-year-old yogi to motormouth politicians claimed to have forecast the calamity. But none of these wise heads had a remedy.

Why didn’t Gates and his foundation, which dole out dosh in the millions, fund a team to invent a Corona vaccine?

Why didn’t other corporate leaders and Harvard educated entrepreneurs pick up the warning from his lectures and lavish largesse on R&D? Above all, why didn’t Bush push his own establishment to flood the labs with greenback in finding solution for an imminent virus attack? 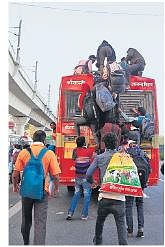 Politicians and the tycoons weren’t the only luminaries to indulge in pathogen pontification.

For many fiction writers and entertainment moguls, the virus is commercial manna.

Innumerable books and films have been plotted on biological brinkmanship with viral wars as the subject. Biowarfare has vectored in policy formulations of rich and mighty nations.

Previous warnings on SARS and Swine flu outbreaks didn’t compel greedy Pharma Phantoms to invest in the future over minting money from tragedy— true disciples of Albert Einstein who said,  “I never think of the future, it comes soon enough”.

In today’s grim germscape, the future belongs to the dead. Astronomical amounts have been spent by governments and magnates to send men to the moon, launch thousands of spy and commercial satellites, stockpile arms, create excessive supply of luxury goods and services, promote manipulated stock markets, write off loans of failed businesspersons and turn politics into an expensive enterprise for which, people foot the bill.

Mass healthcare has never been the top priority of a majority of nations. Even developing economies like India have built their financial ecosystem to favour the Services Sector. We and many other countries spend less than two percent of GDP on mass healthcare and even abysmally less on medicare research and development for the days ahead.

Perhaps, the COVID-19 tragedy couldn’t have been prevented. The creation of advance research protocols and social architecture to deal with it would have minimised the damage.

There is severe shortage of medicines, masks, testing kits, ventilators and personal protection kits. The demand may have been limited, but a prototype or template to immediately kick start production would’ve checked the spread.

Now it is taking two-three weeks for any country to get even preliminary testing kits. Justifiably, the current emphasis is on containing the virus and offering temporary economic relief to marginalised people and entrepreneurs.

Affluent nations like the US, Britain, Europe and China have allocated 10 to 15 percent of their GDP for relief. They have dumped the sacred principle of deficit prudence to pull their economies out of the mess.

Meanwhile, India has chosen its own virus warpath. With nearly 15,000 cases, it is better placed to deal with the situation.

Though conservative in extending economic relief to the business, the government has successfully followed the total lockdown model to halt the virus from spreading its tentacles. Such a six-week clamp may perhaps flatten the curve fast, but its economic consequences for the lower and middle class people aren’t accounted for.

Over 25 million migrants were stuck in various parts of the country. Lacking proper housing and other amenities, they were the first to revolt. Almost every agency from the government and NGOs are distributing free food.

At the moment, the number of food packets seems to exceed the number of citizens on the streets. Yet this generosity hasn’t deterred blue-collar workers from leaving their urban domiciles on foot, sometimes walking for over 500 kilometers, to reach their villages.

Even politicians, civil servants and other well-connected people have violated quarantine. Massive religious gatherings, opulent marriages and even political gatherings are happening as if the contagion is someone else’s problem.

Such defiance of the regulatory mechanism reflects the fact that India hasn’t been able to leverage its unique social, economic and religious identity to be a corona counter.

Foreign trained poverty economists are pushing for free distribution of surplus food stocks. Unfortunately, financial pundits worldwide are suffering from a crystal ball complex because they will address tomorrow only “why the things they predicted yesterday didn’t happen today”.

Health experts are concentrating on preventive medicine and hardly bothering about future healthcare. India needs an economic model for survival today in order to thrive in the future.

Inversely, Corona could revive the Indian rural economy if unemployed labour is given alternative jobs like stitching masks, manufacturing kits and other medical equipment, and keeping the supply chain of essential goods and services intact.

The solution to swat every virus is Vitamin M (money). Unless, each and every person is ensured of its regular supply, the monster cannot be successfully fought and flattened.

However humanistically heretical it may seem, Bharat’s spiritual strength to exploit the pandemic’s karmic payoff makes corona a godsend to revive the ‘Make in India Mantra’. Let such a germ of an idea be born in the karmashetra of the Indian spirit.

Stay up to date on all the latest Columns news with The New Indian Express App. Download now
TAGS
Coronavirus COVID 19 Coronavirus Outbreak