Dear Mamata Di, Every victory is an opportunity.

Every victory is an opportunity. Every loss is a possibility. Your electoral defeat by your own protégé Suvendu Adhikari in Nandigram hasn’t doused your fighting spirit which fuelled TMC’s cyclonic triumph over the formidable BJP, which put men, money and machine to depose you from Writers Building. It was the ugliest political battle of your life. The BJP’s campaign was led by omniscient orator Narendra Modi supported by a humongous party organisation. You are the second woman chief minister to win three consecutive terms after Sheila Dixit in Delhi. And you are the only regional leader who has thrived in the Modi-dominated political mandala. But after victory comes grace and greatness.

The choicest invectives and adjectives were hurled at you. But the voters of Bengal chastised the BJP for the ‘Didi- o-Didi’ catcalls. Now, they expect you to rule, not rail. Election after election, they have given you more seats and a higher share of the votes in the Assembly, not for indulging in a war of words with the Prime Minister and other BJP leaders. After the viciously vindictive verbal war, you could have demolished your adversaries with silence and by extending constructive cooperation to those who are unable to digest your well-deserved victory. 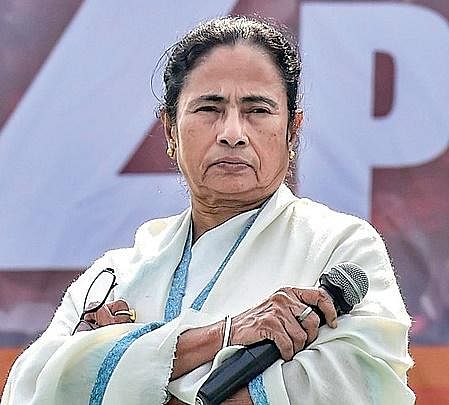 You may not have yet become a credible national alternative with an acceptable ideology. But Mamata Didi is now a pan India brand with a difference. Never before has so much time and money been spent on TV and other platforms to discuss the impact of the Mamata Metaphor on national politics. You are not one of those politicians who were born with a silver spoon in your mouth. Like Modi, you have a lower middle-class background. A Brahmin you may be, but your cotton sari and hawai chappal persona places you apart from other netas.

But your post-win rhetoric does not reflect the posture of a victor. When you assert that “we want PM Modi removed”, it betrays misplaced confidence. You can’t, even if you wish to, topple mighty Modi who enjoys the highest popular ratings and almost two thirds majority in the Lok Sabha. You have an outside chance of marginally diminishing this advantage, if you rise above personal peeves. It is easy to understand your indignation when the threat to your party is continuous and Central agencies are unleashed against your ministers. But can West Bengal flourish through incessant confrontations with the Centre and Modi personally? You always mention the Constitution. It provides certain privileges to prime ministers which chief ministers aren’t entitled to. A chief minister is not expected to boycott the Prime Minister or display anger by walking out of meetings. The Prime Minister is a constitutionally protected institution.

During the past seven years, you have rarely attended a meeting called by Modi. You are perhaps the only CM who has been consistently dismissive of him as nobody. This may be prompted by the BJP’s intolerance towards your defiance and posing a challenge to its icon. You erred by not reading the right signals. Bengal’s voters gave the BJP 40 per cent of the ballots and 18 MPs in 2019-2020. Like many states, Bengal thinks national during national elections and local during local elections. And Defection Dramas contributed handsomely to BJP’s poll fortunes.

You must realise that you have fallen into the saffron trap. BJP’s aims to create a Bengal narrative as a nationally politically and economically integrated unit with Kolkata as an investment and conference destination like Mumbai, Bengaluru, Chennai and Hyderabad as before. After the Left and the Congress lost their relevance in Bengal, the BJP made a grab for the vacated space. Its objective is to provide an ideologically nationalist alternative to a regional party which survives on minority appeasement and assumed cultural identity.

In protecting your local turf, you sacrificed the national outlook you had acquired as an active Congress leader. You fought the Communists to protect Bengal’s culture and oppose their exclusive ideology. Only you could demolish their three decade-rule because of your moxie as a champion of the right cause and the marginalised. Unfortunately, your party has been infiltrated by the same elements which had converted Bengal into a bloody battlefield of political hatred.

Please don’t forget the axiom that “the most dangerous moment comes with victory”. After the election, the numerous political murders and displacement of your foes have dulled the sheen of your magnificent triumph. You could have taken a tough stand by punishing the culprits and assuring your protection to people who didn’t vote for you. Your complaints against the Centre about harassment may be genuine. The hyperactive Governor’s antics are irritating you. But your aggressive posturing may initiate more adverse Central actions against your ministers, civil servants and supporters.

Show magnanimity and forget the past and current torture for a rewarding future. You may not have revealed your prime ministerial ambitions, yet. But your close confidantes have. Now that you have put in place your succession plans, your acceptability beyond Bengal’s borders would depend on your ability to adjust and accept. By electing you thrice in a row, the ordinary ‘manush’ decisively rejected elitist domination in state politics. Almost all other chief ministers belong to a dynasty or a caste cartel. The rest lose connectivity beyond their geographical boundaries.

Successful CMs like Naveen Patnaik have chosen the middle path of selective confrontation and mutually gainful consensus. India needs an assertive Opposition led by credible leaders. Barring Sharad Pawar, no other challenger has the stature to bring the fragmented parties together. You would add to his political craft by becoming his ally. Both of you along with others offer a better and credible alternative idea of India and not just an alternative individual to replace Modi. You are bound to lose to Modi in your personality driven endeavour. The Gandhis are blinded by their lust for power inspite of losing their lustre.

Your admirers and promoters define you as Maa Durga. In Hindu mythology, Durga acquires much better traction when placed on an equal pedestal with Ram. With the saffron rise in Bengal at the cost of the Congress and the Reds, you have to tread a careful path. You will flounder if you place Bengal above Bharat. After all, numerous Bengali scholars and saints have contributed to making India what it is today. Modi can survive without Mamata. But Mamata may find it difficult to thrive without Modi. The battle is over. Not the war.

Talking consensus, instead of taking umbrage, is the best way for both leaders to reach the trillion-dollar horizon together once the pandemic is conquered. Or, else the epidemic of hatred will spill over the borders of Bengal and taint the national nature of your destiny. Bring more of Bharat to Bengal for its transformation into Sonar Bangla.

Now we are on Telegram too. Follow us for updates
TAGS
Suvendu Adhikari Mamata Banerjee PM Modi Trinamool BJP