Stopping the nurses in their tracks are people who are afraid of contracting the disease.

PERAMBRA: It is a shock the medical staff at the Perambra Government Taluk Hospital will take a long time to recover from — the untimely demise of their dear colleague P N Lini after attending to a person infected by the Nipah virus. Now, close on the heels of the tragedy comes another shocker: Ostracisation. 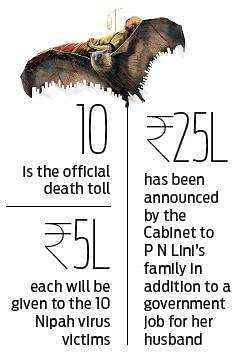 Stopping the nurses in their tracks are people who are afraid of contracting the disease. Using the public transport is a strict no-no. When the Express team reached the hospital, some members of the staff were on leave. Nurse Leena (name changed) summed up her courage and boarded a public transport. To her shock, the bus conductor ‘advised’ a passenger not to sit near her.

A senior nurse at the hospital confirmed the incident. ‘’It happened on Tuesday. Leena was returning home in a private bus. When the bus reached Ulliyeri, a woman got ready to occupy the vacant seat next to her. The conductor cautioned her against sitting next to Leena as she is a nurse of  the Perambra hospital. The incident has traumatised her to the extent that she now keeps away.  We’re taking efforts to bring her back to the hospital.”

Almost all staff members had similar ‘ostracisation’ stories to share. A senior nurse had a bitter experience from co-passengers while travelling in an autorickshaw. A passenger demanded she keep a safe distance from her while travelling from the hospital to Perambra town.

The hospital staff have submitted a complaint to the District Medical Officer V Jayasree, who  said the issue should be considered seriously. “The department will ensure transportation for the staff if required,” she said.

No death on Wednesday

Kozhikode: Wednesday was the first day when no death was reported in the district after the presence of Nipah was confirmed on Sunday. One more patient from Malappuram was confirmed of being infected with the virus.

Now we are on Telegram too. Follow us for updates
TAGS
nipah virus Perambra Government Taluk Hospital