According to Pradeep Kumar, councillor, Chengannur municipality, the correct picture will be arrived at only after village officers submit the data. 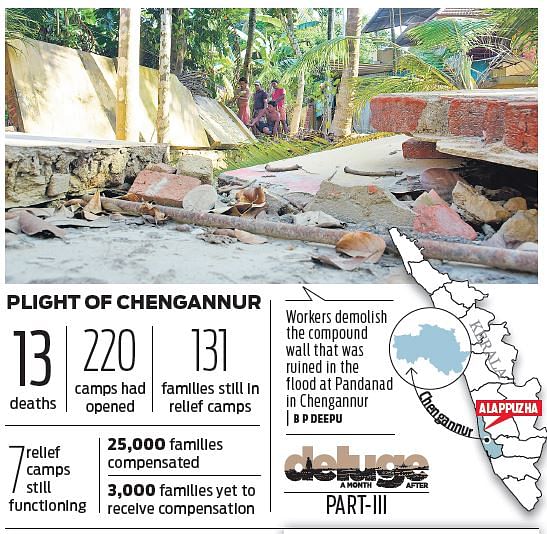 CHENGANNUR: Many areas in Chengannur now resemble ghost towns. With the floodwater washing away the foundation of many a house making the structures unstable, people have shifted elsewhere. The municipality that recorded 13 deaths during the floods is yet to come up with a complete picture of the loss to houses and agriculture.

According to Pradeep Kumar, councillor, Chengannur municipality, the correct picture will be arrived at only after village officers submit the data.

“As of now, seven relief camps accommodating 131 families are functioning. These people have nowhere to go since their houses, either owned or rented, have been damaged fully. They will leave once they find alternative living arrangements,” Pradeep said. On the positive side, the waste management process is going smooth.

“The municipality has roped in members of neighbourhood groups and MGNREGA workers to collect the waste generated by floods. It is being collected and stored at a designated place from where it will be disposed of by the Clean Kerala Company,” he said. So far, over 25,000 families have been given the compensation amount of `10,000.

“Over 3,000 families remain to be compensated, which will be done soon. All wells have been cleaned. Since people are afraid of using the water, we have roped in the services of tankers to supply water to all the wards in the municipality,” the councillor said.

The loss sustained by the agriculture sector is yet to be ascertained. “Teams comprising officers from various departments are carrying out surveys,” Pradeep said. A lot of animals, especially milch animals like cows and goats have been lost to the floods. The damage may run into crores of rupees, said Prakash, a resident of Pandanad.

According to Pradeep, the task of rebuilding Chengannur is a tough one. “With cleaning operations nearing completion, we can now focus on helping people get back on their feet,” he said. As part of funding reconstruction projects, the Asian Development Bank authorities visited various affected places in the municipality.

Now we are on Telegram too. Follow us for updates
TAGS
Kerala floods Chengannur Kerala floods one month after