Part of Tudu’s innocence is hope, the kind that often seems beyond reason or logic

GOA: There is a certain innocence to Arjun Tudu. Expectedly so, for while he has briefly hobnobbed with the glitz and glamour of the Indian Super League and the national team, the Services player remains the quintessential departmental footballer. His career so far has been a case of ‘nearly there’. His talent and performances have put some of the best teams on notice but their moves, with the notable exception of Delhi Dynamos, were all thwarted by his employers. Tudu, for his part, has never considered quitting the Indian Army. 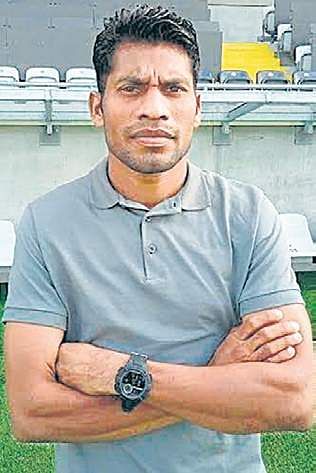 Part of Tudu’s innocence is hope, the kind that often seems beyond reason or logic. Last year, he was the talk of the town after firing Services to the Santosh Trophy title, top-scoring in the process. East Bengal wanted him, but Services would not let him go. Dynamos wanted him and Services did let him go, but he did not play a minute. This year, the 26-year-old’s star is much more dim. Services have made a group-stage exit and Tudu scored a solitary goal in their last game. But hope he still has.

“I think East Bengal and Mohun Bagan are still interested, as is Minerva Punjab FC and Chennai City FC,” he says. “Now that the Santosh Trophy is over, I hope I will get the permission to play in the I-League. If any of the clubs can get all the paper-work sorted, maybe I will get the chance to play this year.”

He is thankful for his stint with Delhi Dynamos last year. But ask him about ISL next year and Tudu suddenly goes a bit pessimistic, nay, realistic. “Last year, Dynamos were interested because we were the Santosh Trophy champs and I was the top scorer. This year, we went out in the group stage and I have scored only one goal. I don’t know if they will be interested. I hope I get the chance to play in the I-League and make my mark.”

Services players are packing their bags as they prepare to leave Goa, but Tudu’s mind still lingers on their fruitless run. The defending champions finished bottom of their group. “We should have done better,” he says. “But then, that is football. One year you’re champions, the next year, you go out in the group stages.”