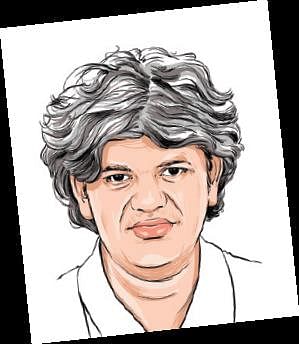 JAKARTA: “It was a death sentence.” That is how Ramadhar Yadav, one of the many people who tried to restore Vinesh Phogat’s career, remembered the incident. “Those immediate months after the surgery... pfft,” said the manager of a company that works with sportsmen and women. The episode he refers to is the operation Vinesh underwent after suffering a freak injury at the Rio Olympics. Her main ligaments on the right knee resembled a war zone and many expressed doubts whether she would even take to the mat again. After more than four months of rehab, she started getting back into competition mode, but the old fizz wasn’t there. She was slower, almost afraid to commit to tackles.

She wanted to forget the injury but couldn’t. Not when the ugly looking scar on her right knee served as a daily reminder. On Monday, she got her reward for living through two years of emotional and physical trauma. At 7.21 pm local time (5.51pm IST), she reached for the stars and grabbed it with both hands. Her emotional reaction told its own story about the stress she had to overcome in the last two years. “Injuries are a part and parcel, but to overcome it is a big challenge,” she said even as pools of water started forming a puddle on the floor.

“I faced difficulties... Emotionally and physically. But as someone said, an athlete becomes stronger once she overcomes an injury. I have become stronger after my injury and learnt a lot from that period.” Forget ‘becoming stronger’. She resembled a battering ram on the mat. She spent, in all, a shade over 11 minutes in her first three bouts. After overcoming Sun Yanan 8-2, she eased past Hyungjoo Kim 11-0 before a breezy 10-0 win over Dauletbike Yakhshimuratova in the semifinal. That last-four match lasted less than two minutes. She came, she saw, the Uzbek blinked and the referee signalled the end.

That was what made Vinesh an attractive wrestler when she broke through as a teenager. Her all or nothing style was a hit. Strategy was for cowards, who were afraid of losing. That high-risk, erm, strategy, had one major flaw. She was only as strong as her weakest link and hers was glaring: lack of a plan B. She seems to have developed one now. Vinesh gave away two points for passivity (whenever amateur wrestlers are considered cautious or prefer to wait and counterattack, they are considered passive by the referee) in the final. She did it because she had a big lead and knew time-wasting was the way to go.

“I had taken four points and when you are playing against such a tough opponent (Yuki Irie), it isn’t easy to score many points. I had competed against her before so I decided I won’t allow her back into the final.” In the first three matches she had opted for overwhelming power. “The idea was to pin down opponents. When you are playing strong opponents, there’s a chance they’ll make a comeback even with 10 seconds left. You want to wrap up the match quickly. I used all my power.”

The other thing visible was the way she attacked, with the swagger of an apex predator chasing lunch. She admitted as much by saying she didn’t think it would be this easy. “This was like Olympics for me... There were Olympic medallists and a wrestler from Japan (Yuki), who are wrestling powerhouses. Everyone’s prayers have been answered.” Including Wayne Lombard’s, the man who worked with the 23-year-old after Rio. “Hopefully she wins gold,” he had said before the final.

“If only outsiders could understand the effort that goes into a comeback like this, they would appreciate it for more than just a gold. It shows character,” Lombard, now associated with women’s hockey, added. She departed on a stretcher 733 days ago, with hope as her only ally. She was carried off the mat on the shoulders of two Indian coaches on Monday. Hope replaced by an overwhelming sense of relief, joy and euphoria.

Now we are on Telegram too. Follow us for updates
TAGS
Vinesh Phogat wrestling Asian Games Asian Games 2018

Hyderabad: Teen jumps to death from 14th floor of a high rise apartment

Alliance with BJP final, Nishad party will contest 15 seats in UP: Sanjay Nishad

Gujarat: Dwarkadhish Temple to be shut amid rise in COVID cases

Third COVID wave may peak in Indore district in next three weeks with 5,000 cases per day: Official