Omitted for slow strike rate a year ago, Pujara underlines importance of application in testing conditions as others slip in rain

KOLKATA: Patience, being intangible, is an underrated skill. Flair players generally garner all the attention. But ability to occupy the crease in difficult situations is what gets the ultimate approval. Cheteshwar Pujara is making this a habit.

The little of cricket possible on the 71 balls bowled on Day 1 had highlighted the approach needed on a green top with grey clouds hanging above, resembling English conditions. The 29-year-old had faced 43 of those, scoring only 8 as he concentrated on negotiating Suranga Lakmal, while the stroke-players surrendered their wickets. 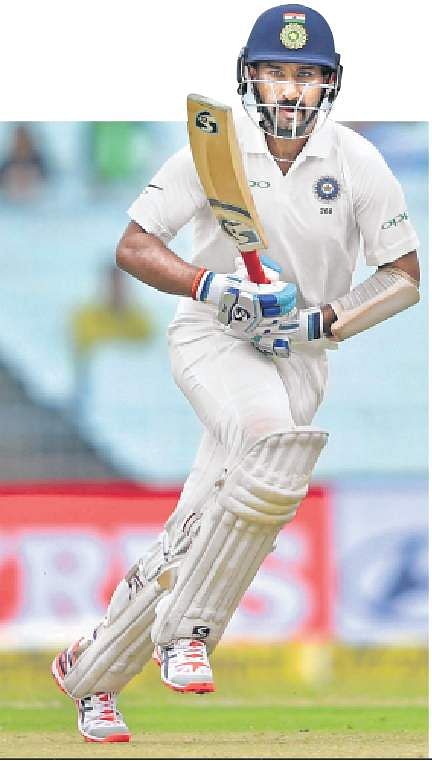 Pujara continued in the same fashion on Friday. Out of a total of 102 deliveries faced, Pujara did not offer a shot to 49. He ended the day batting on 47, out of a total of 74. If there was one batsman you would want to bat for your life, the Arjuna award winner would top the list.

The Sri Lankan ploy has been simple throughout. Try and bowl the fourth stump line and, with the ball doing a fair bit, induce mistakes from the batsmen. While they had their way twice on Day 2 through Dasun Shanaka, Pujara sealed one end up. While he was dropped post the West Indies tour for having too slow a strike-rate, such conditions prove his actual worth to the side.

The Saurashtra batsman knows how to grind down opposition. He keeps leaving good deliveries and does not get tempted. He spent 21 balls to get off the mark and had scored only 17 after facing 60 balls. All these, however, does not mean he is not ruthless. By the time rain forced players off for what turned out to be the end of the second day’s play, he had reached 47 off 102. Bad deliveries are usually punished and it was no different against the Lankans. He hit nine boundaries, four of them past mid-off.

“He has a grip on all conditions and has the skill-set to succeed everywhere,” R Sridhar, India’s fielding coach, said. “With the moving ball, you need to play as close to your body as possible and try and keep the bat within your body line. Playing straight is of utmost importance. If you see Pujara’s knock, what stands out is most of his shots were to the right of mid-off. He had a very narrow V. It was a simple mantra and he did that to be successful. It was probably one of the best 47 runs I’ve seen from Pujara over the last two or three years.”

While Pujara has missed out on lucrative IPL contracts time and again, he has used that time to play in England’s County Championship. He played five games for Nottinghamshire this time, averaging 39.29. Not the best by Indian domestic standards, but not everything can be measured in numbers. The experience gained from playing in difficult environment has its own rewards and Pujara reaped those in Kolkata.

The value of Pujara’s innings was best reflected in the reaction he got from the dressing room once he came back: a standing ovation! The team will be hoping for more of the same on Saturday, if the rain gods stay away.

2
Since 2012  this is the second rain-interrupted match in India, which has hosted 30 Tests in this period.

Skipper knows when to rest
India’s fielding coach R Sridhar insisted skipper Virat Kohli would not miss a chance to play as long as he is fit and would ask for rest only when his body demands. “Each team member is proud to represent the country at any given opportunity. Knowing Virat, he wears his pride on his sleeve. As long as his body allows he would not miss a second of action.”