It will be interesting to see how the ODI's number one batsman Virat Kohli responds to Paul Heyman's message.

Star Sports India, who have been broadcasting India vs West Indies ODI series had put out a tweet congratulating Virat Kohli's batting performance in the third ODI that happened on Saturday.

Responding to the tweet, Paul Heyman replied back with a cheeky message. He said, "I will give props to King Kohli for his accomplishments, and therefore issue a one-time pardon to Star Sports India for "borrowing" (ahem) from my catchphrase for Brock Lesnar #EatSleepConquerRepeat. Thou art pardoned by decree of Your Humble Advocate. You are most welcome!" 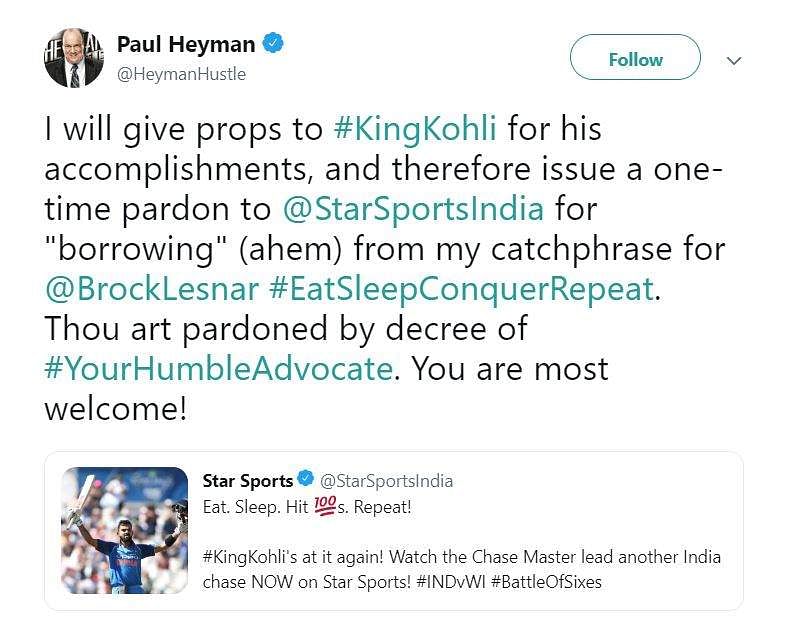 The fun did not end there as Star Sports India came out with another tweet stating that Virat Kohli can also be referred to as 'beast incarnate'.

Paul Heyman was not ready to end the Twitter banter as he responded back with an interesting message for Virat Kohli. He tweeted, "In order for King Kohli to even consider being billed as The Beast Incarnate (property of @BrockLesnar, reigning defending undisputed greatest athlete in the world), he would have to have Paul Heyman as an Advocate. Star Sports India, I applaud your passion, for I am the GOAT! " 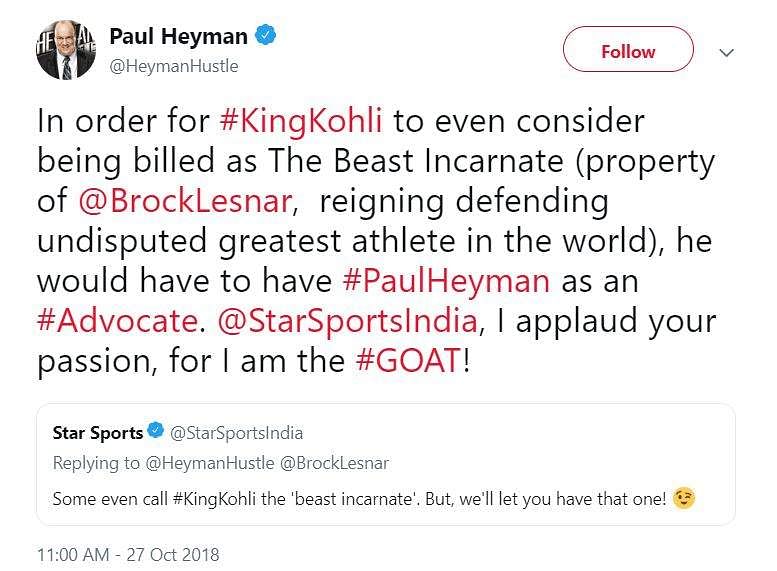 It will be interesting to see how the ODI's number one batsman Kohli responds to Paul Heyman's message.

During the second ODI, Kohli became the fastest to 10,000 ODI runs, getting there in 54 fewer innings than Sachin Tendulkar who held the record previously. He became the 13th batsman to reach the milestone with an unbeaten 157 off 129 balls, which was his 37th ODI hundred. The very next match Kohli yet again smashed another century taking his tally to 38.

The 29-year-old's journey has been awe-inspiring, from his first-class debut, winning the U-19 World Cup, captaining the Indian team, to rewriting batting records at will.

Besides Tendulkar and Kohli, Sourav Ganguly, Mahendra Singh Dhoni and Rahul Dravid are the other Indian cricketers to cross 10000 runs in the format.

Stay up to date on all the latest Cricket news with The New Indian Express App. Download now
(Get the news that matters from New Indian Express on WhatsApp. Click this link and hit 'Click to Subscribe'. Follow the instructions after that.)
TAGS
WWE Brock Lesnar Paul Heyman Virat Kohli