The decision of the Committee of Administrators to mark state associations non-compliant and partially compliant to the Supreme Court’s reform order has not gone down well.

CHENNAI: The decision of the Committee of Administrators to mark state associations non-compliant and partially compliant to the Supreme Court’s reform order has not gone down well. In its status report submitted to the court on Monday, the CoA named seven associations in the first list and 10 more in the second, urging that their voting rights be suspended if they fail to file an affidavit of compliance within a week.

Listed as non-compliant, the Karnataka unit has said it is waiting for a reply to its letter to the CoA seeking clarifications. Categorised as partially compliant, Tamil Nadu has expressed surprise and said that if need be, it will explain its version to the court. On Tuesday, a few other state associations joined the growing number of voices of dissent against the CoA.

“Being the first state body to implement the Lodha recommendations in full, we were expecting the CoA to point out the shortcomings in what we have submitted,” said Vidarbha Cricket Association (VCA) president Anand Jaiswal. “We were hoping to be told where we were found deficient. But we are surprised that the CoA has not communicated anything to us. We might write to them asking what went wrong.”

The only association affiliated to the BCCI which had its revised constitution approved by the CoA, the VCA among other things has been accused of forming an advisory committee consisting of former office-bearers. This is said to be in violation of the court order. Clarifying that this committee without executive powers has been part of the VCA, Jaiswal said, “The only changes in the constitution submitted then and the one submitted now are the ones specified by the court. The rest is the same. That’s why we find this surprising.”

Also listed as partially compliant, the Madhya Pradesh Cricket Association (MPCA) has similar things to say. “Whatever was needed in terms of upgrading our constitution has been done. Now it’s up to the court to decide what remains to be done. That way, we have nothing to say. But yes, had the CoA informed us of the problems, we could have sorted it our earlier,” said MPCA secretary Milind Kanmadikar.

Categorised as non-compliant, the association of Meghalaya is blaming the CoA for not going through their documents properly. “After submitting the compliance certificate, a few more things were needed. Everything was done by October 3. The chain of mails confirms this. We have written to the CoA again. If they see our papers properly, they should find them alright,” said Naba Bhattacharya, secretary of the Meghalaya association.

With the CoA maintaining silence and the states insisting they have done the needful, the next chapter of the BCCI reform drama is expected in the court. 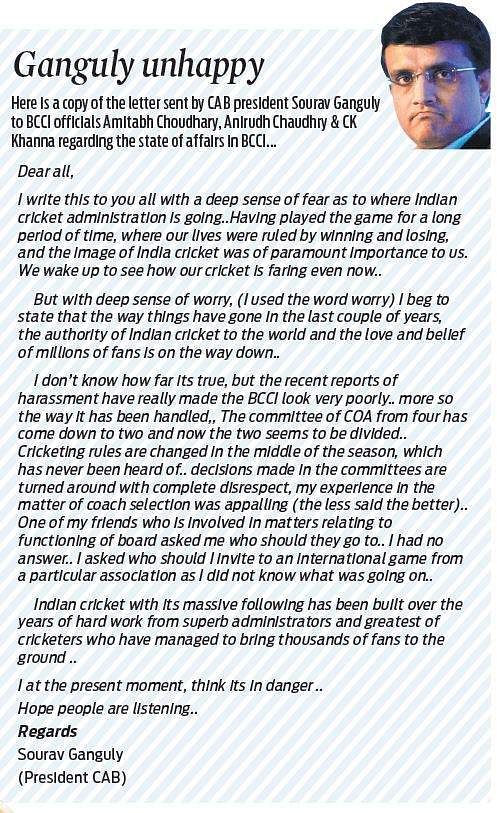