Making most of what you have, the Windies mantra

West Indies did spiral to their second-worst defeat in ODIs at Brabourne Stadium, but not before they inflicted two big upsets on India, a tie in Visakhapatnam and a 43-run loss in Pune.

CHENNAI: Monday in Mumbai might have been of the expected kind, but the last week in its totality has been far from it. West Indies did spiral to their second-worst defeat in ODIs at Brabourne Stadium, but not before they inflicted two big upsets — a tie in Visakhapatnam and a 43-run loss in Pune — on their second-ranked counterparts.

“I’d actually say that West Indies also won the second ODI,” remarked former India selector Anshuman Gaekwad. “They’re without any of their big guns and are quite inexperienced. Rankings apart, they’re literally up against the best side in the world, that too in their own backyard. To tie a match with such odds, I’d say that counts as a win.”

Gaekwad isn’t exaggerating that “odds” bit. Only three players from West Indies’ 16-member squad have played 50-plus ODIs. Their sole intimidator up top — Evin Lewis — was excluded from their roster even before the 50-over leg began. Not to mention that four of them have cut their teeth for the first time in this format since last Sunday.

“That’s been the best part about their outings so far. Most of these guys haven’t had enough game-time, at least the standard that’s needed to face a team like India,” observed Gaekwad.

“Their inexperience has shown in the way they’ve approached things in the middle; as if they don’t have solid plans for targeting individuals. But, that hasn’t been true for a few of them.”

Those few men are actually three in number: Shai Hope, Shimron Hetmyer, and Jason Holder. Had these cogs not turned at crucial moments, West Indies’ fight in this series would’ve finished even before beginning.

Hope may have built up a good curriculum vitae in Tests, but the right-hander hasn’t been able to make the same kind of ripples with the white ball.

A solid average (41.36) notwithstanding, the 24-year-old’s conversion rate (he had only one ton before this series began) and strike rate (68.9) had been dissected and labelled as his potential weaknesses. Hetmyer, on the other hand, was deemed as inexperienced and self-destructive, courtesy the mindless displays of aggression that had cost him during the Tests series.

But, apart from being chief architects of the said upsets, the two batsmen are also West Indies joint top run-scorers (250), with two centuries and two fifties between them.

“There aren’t many players who can pick spinners’ variations by observing the seam position. Hope is one of them,” was Gaekwad’s reasoning for the two’s success.

“Hope has been able to spot the seam after the ball’s release and has gotten into positions to negate those variations. Hetmyer seems to have matured after Rajkot and Hyderabad. His shot selection was spot on, especially during that tied match. He went after balls that deserved to be put away.”
He may not have shone with the ball as he did during the Tests, but Holder has been a constant pain for India with the bat. Before Mumbai, he was part of three sixth-wicket partnerships of 60, 47 and 76. The third (with Hope) was instrumental in their Pune win.

“Yes, he’s been key with the bat down the order,” said Gaekwad. That 224-run loss notwithstanding, West Indies may still be fancying their chances of denying India a series win in Thiruvananthapuram on Thursday. 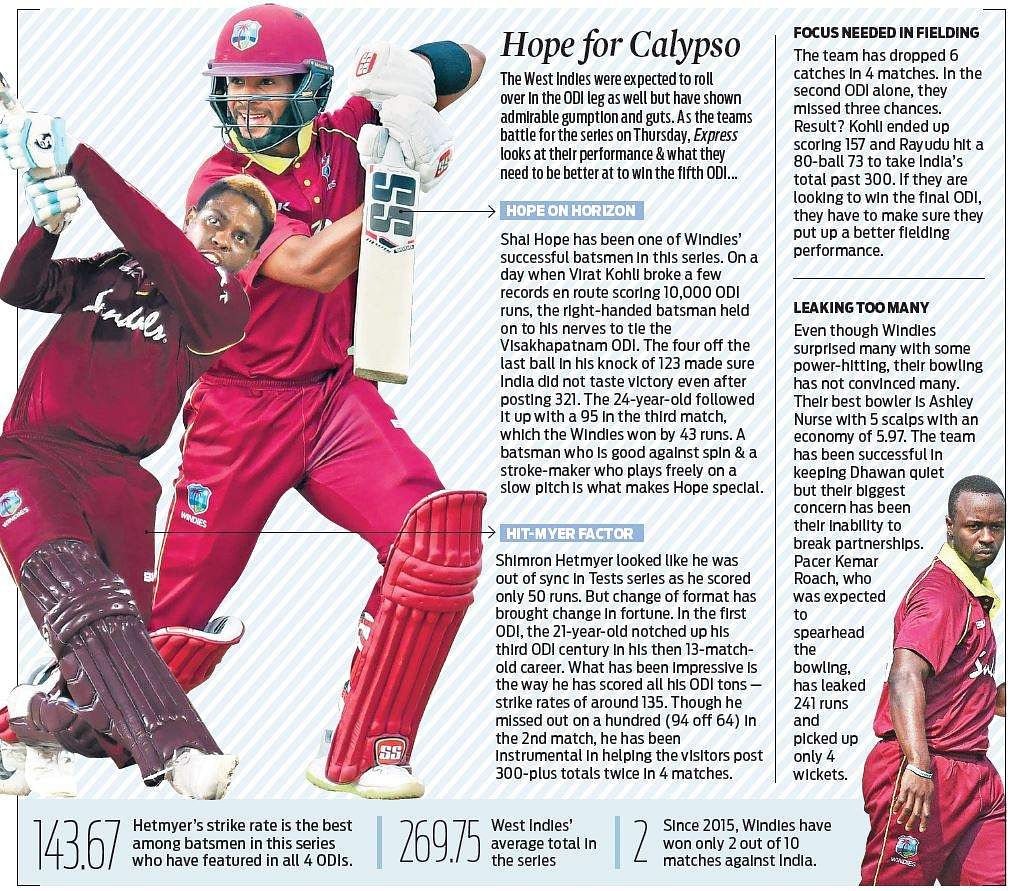