An immediate beneficiary of the change in BCCI’s stance on coming under National Anti-Doping Agency (NADA) is the world body of cricket.

CHENNAI: An immediate beneficiary of the change in BCCI’s stance on coming under National Anti-Doping Agency (NADA) is the world body of cricket. The International Cricket Council (ICC) was unable to become compliant to the World Anti-Doping Agency (WADA) code because of the Indian board’s refusal to commit to the anti-doping agency of the country.

In order to be rated WADA compliant, which is necessary for a sport’s inclusion in Olympics, ICC required all member countries to follow the code of their respective national anti-doping bodies. Until Friday, India’s was the only board that was not abiding by this clause. Following BCCI’s decision to come under the ambit of NADA, this roadblock is gone.

“This means that ICC is WADA complaint now. Until today, even though ICC was following WADA guidelines, it was not adjudged WADA compliant because not all the member boards were compliant with the rules. Now that BCCI has come on board, that impediment is removed. Paperwork can now be started to get the green light from the WADA,” sources tracking developments told TNIE on Friday.

This is also a boost for ICC’s bid to get cricket introduced in the Olympics. A major argument against its push was its status vis-a-vis the WADA certificate, which is a necessary requisite for any sport to become a part of the event. Becoming WADA compliant means the ICC can restart its campaign to make cricket a part of the event.

Although in the past ICC officials said that they would be targeting the 2028 edition in Los Angeles, sources reckon that the world body is in no hurry.

“As far as Olympics is concerned, that is still some time away. Now that BCCI has made its stand clear, ICC will have discussions in this regard. But its too early to say when that will start.”

It has been learnt that BCCI will not be involved in talks regarding cricket’s inclusion in the Olympics as long as it doesn’t have an elected body. Since BCCI at the moment is run by a court-appointed panel, ICC doesn’t want to make it a party to discussions regarding the future of the game. 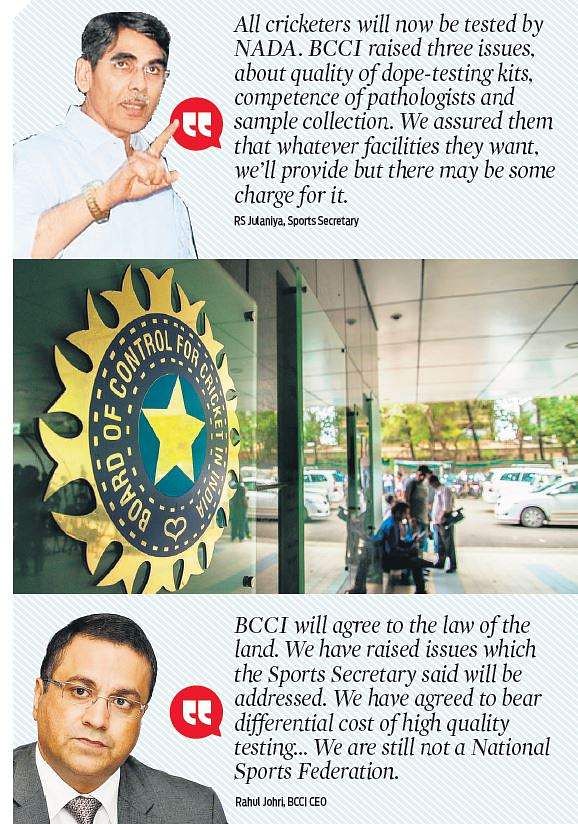 Stay up to date on all the latest Cricket news with The New Indian Express App. Download now
TAGS
ICC BCCI NADA WADA