Having a 1-0 lead in the three-match series, it will be interesting to see how Kohli sets up the team for the match.

THIRUVANANTHAPURAM: In the morning, one could feel the onset of a December chill, in the afternoon the weather was bright and shiny. But on Saturday evening, one hour before the expected arrival of India and West Indies teams for the second T20I, the heavens opened up. There were moderate showers coupled with muffled thunder.

The rains ceased after an hour but everyone will be anxiously waiting for the weather forecast on Sunday when the two sides face-off at the Greenfield Stadium here.

One wonders if the return of international cricket to this venue will be dampened by rains. Last time, it was a lack of competitiveness that played spoilsport.

A year ago, when these two sides met in an ODI here, West Indies were so shambolic that they were bowled out for 104 and India chased down the target in just 14.5 overs

The fact that the West Indies didn’t show up on the day left the fans high and dry as they didn’t get their money’s worth. However, Sunday’s clash is expected to be a much more competitive affair, given how the first match of the ongoing T20 series turned out in the end.

A new look West Indies, under the leadership of Kieron Pollard, took the fight to India in a match where they scored over 200 runs. It took a magical innings from skipper Virat Kohli to take the game away from the visitors.

The curator of the stadium said that he has prepared a sporting wicket.“We have prepared a good wicket where you can expect a lot of runs. It’s a sporting wicket and we have made all preparations to have a good game of cricket. Preparations have also been made in case there is rain. Everything is ready. We have no worries about the rain,” he said.

Having a 1-0 lead in the three-match series, it will be interesting to see how Kohli sets up the team for the match. While the bowling department was subjected to some shuffling in the first tie, the batting was largely according to the script. KL Rahul opened the innings, and all the regular names featured. Rishabh Pant walking in at No 4 instead of Shreyas Iyer was the only real surprise.

Talking about team selection, down south in Kerala, the consensus is that the maverick batsman Sanju Samson has what it takes to play for India. The fact that the wicket-keeper has been included in the last two T20 tournaments is an indication that he is in the fray.

But every time his name is not in the playing eleven, there is a lot of debate on social media, especially by those from this part of the world, that Sanju deserves at least one chance. Especially when Pant has been wobbly with the bat and gloves.

With Kohli publicly backing Pant to the hilt, Sanju will have to play second fiddle to the Delhi cricketer once again. But the fans would love it if they get to see local boy Sanju walk out in India colours at his home stadium. It would be a dream for Sanju but with India looking to seal the series, he might have to wait for the time being. 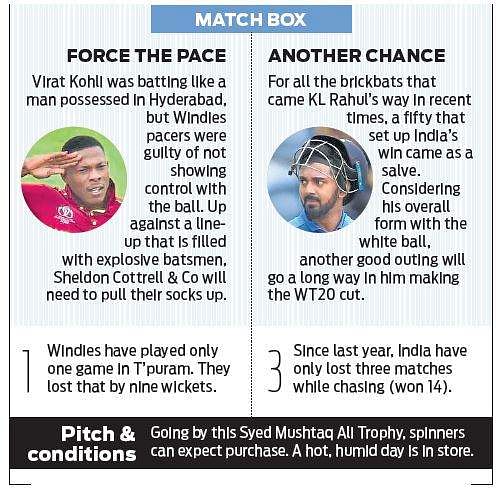