1
The 1996 edition was the first instance of three nations co-hosting the event.

Walkover in cricket is not common and if it’s the World Cup, no team would want to concede a match. Yet, it happened twice in 1996 and 2003 World Cups. In 1996, when India, Sri Lanka and Pakistan co-hosted the tournament, in the aftermath of a bomb blast that happened in Colombo, Australia and West Indies refused to play in the island nation and gave walkovers. It meant Sri Lanka gained precious points that enabled them to make it to quarterfinals. It followed in 2003, co-hosted by Zimbabwe, Kenya and South Africa. England refused to play hosts Zimbabwe because of political issues and New Zealand didn’t make the trip to Nairobi to play Kenya citing security reasons. Again, this helped Kenya massively as they went all the way to semifinals. 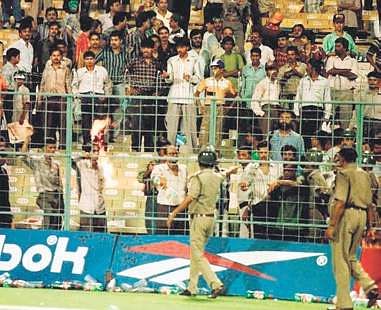 Black armband protest
In a rare sight, Zimbabwe stars Andy Flower and bowler Henry Olonga wore black armbands to ‘mourn the death of democracy’ in a protest against their country’s President Robert Mugabe in the 2003 World Cup. The duo even released a statement a day before their opening match. While the political stance drew criticism from senior cricketers and political figures in the country, they were praised widely by international media. But after the world cup, an arrest warrant was issued against Olonga for treason and he was forced to live in exile. The duo never played for the country again.

A day after Pakistan’s shocking loss to Ireland in their second group match in 2007 World Cup that knocked the 1992 champions out, their coach was found dead in his hotel room. His death, primarily suspected as a murder, rocked the cricket world and variety of conspiracy theories started surfacing including the role of cricket mafia and fixers. Even the Pakistan team wasn’t spared. The investigation into the alleged murder was dropped and later it was announced that he died of natural causes. Woolmer was suffering from diabetes for a long time.

Choking at the death

Buoyed by a world-class squad, South Africa were the favourites to win the 1999 World Cup. Despite the hiccups, the Proteas progressed to the semifinals and faced Australia. Needing 214 to win, Jacques Kallis (53) and Jonty Rhodes (43) set up the platform for the chase. With one wicket in hand and 9 runs needed off the last over, Lance Klusener hit two consecutive boundaries off the first two balls as a maiden final appearance looked certain. But a miscommunication between Klusener and Allan Donald resulted in a run out. As the match ended in a tie, Australia’s head-to-head record against South Africa in the tournament meant they made it to the final.

The mecca of Indian cricket, Eden Gardens, is also infamous for its crowd trouble. In the 1996 semifinal between Indian and Sri Lanka, with the whole world watching, the Eden Gardens was once again under the spotlight. Chasing 252, India collapsed from 98/1 to 120/8 in a blink of the eye. A section of the crowd threw bottles on the outfield and set few seats on fire. A restart was attempted but proved futile and the match was awarded to Sri Lanka.