CHENNAI: 2006 was the year that changed former Madhya Pradesh cricketer Nitin Menon’s life. Then 22, the right-handed batsman had made his List A debut a couple of years ago, but was dropped from the state team after indifferent outings.

At the time of crisis, Nitin sought advice from his father Narendra Menon, a former international umpire, who had officiated in four ODIs. Narendra asked him to take the state panel examination for umpires. Everything changed thereafter. In just one year, Nitin quit playing and started officiating in BCCI-conducted matches.

The 36-year-old’s rise continues. On Monday he became the youngest member of the International Cricket Council’s Elite Panel of Umpires replacing England’s Nigel Llong for the 2020-21 season after an annual review.

“2006 was a difficult period. I was disappointed but decided to take a chance after my father’s advice. It was not easy as my teammates were progressing as players and a few of them even told me that I was giving up too early. But looking back, I feel I was right to switch to umpiring,” Nitin told this newspaper.
The Covid-19 pandemic has brought sporting activities to a halt, with the future still looking uncertain. Nitin, however, is hopeful of cricket commencing soon. “It’s off season in India this time of the year.

Globally, England are gearing up to host the West Indies and Pakistan. We, as part of the cricket fraternity, are hopeful these series will have a positive impact on resumption. With travel restrictions in place, I won’t be able to officiate immediately but mentally I am ready to take the field whenever I am asked to. It’s better late than never.”

Speaking on one advice given by his father when he took to umpiring, Nitin said, “He told me to concentrate on the bat, ball and stumps rather than going by a player’s reputation. If we keep reputation of a player in mind, then we are putting unnecessary pressure on ourselves.”

It was Nitin’s consistency that saw his elevation from International Panel to Elite Panel in just three years and his father, who was also BCCI umpires’ coach from 2008 to 2015 and the MP cricket association secretary, felt this consistency will help him in future.

“In the past when I used to officiate, there was no one to keep a tab on umpires’ performance. These days with the introduction of technology, it’s easy for the ICC to evaluate their performance and reward them accordingly. I hope Nitin will maintain consistency in the days to come as he has more than 23 years to go before retiring,” Narendra said.

Speaking on the big switch back in 2006, the father said, “It’s always easy for a cricketer to switch to umpiring. Because of his experience as a cricketer, the transformation was easy. Besides, he is mentally tough and a quick learner. These qualities helped him.”

Narendra, who had also played 51 first-class and one list A matches for MP, along with former international umpire Sudhir Asnani was the guiding light whenever Nitin needed. “We were always there and shared our experiences with him which helped him in developing as an umpire. Even the MP cricket association recommended his name for the national panel after seeing his hard work,” Narendra signed off. 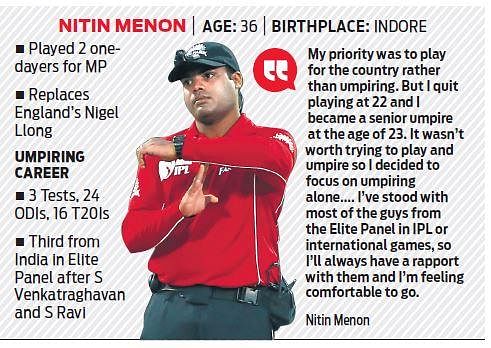