The 27-year-old striker on Friday shared a video of him batting on Instagram with a bold message for Indian cricket captain Virat Kohli...

Tottenham Hotspur's cricket videos keep coming. Not long after midfielder Dele Alli tweeting his catching skills during an indoor cricketing session with his teammates, the Premier League club on Saturday shared a video where the players are seen with the willow and ball again. The London club's leading stars including Gareth Bale, Harry Kane and Eric Dier are seen taking turns to bat with most making contact with the ball effortlessly.

Tottenham captain Harry Kane, who also leads the English national side, seems particularly impressed by his batting skills following the fun time inside the gym. The 27-year-old striker on Friday shared a video of him batting on Instagram with a bold message for Indian cricket captain Virat Kohli.

"Got a match winning T20 knock in me I reckon. Any places going for @RCBTweets in the @IPL next season @imVkohli," Kane captioned his video. 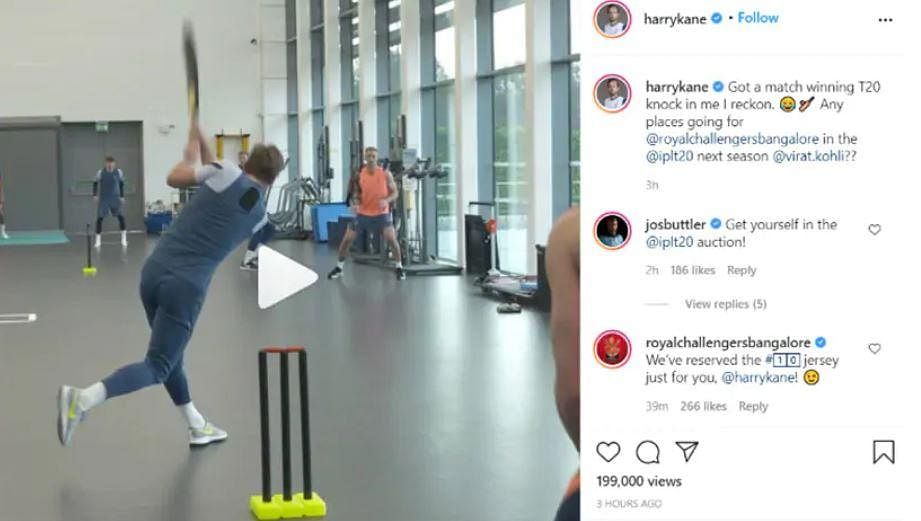 Busy with his team taking on Australia in Sydney, Kohli was too busy to give Kane's proposal a look. However, Royal Challengers Bangalore was quick to respond and assured the Englishman that they'll reserve their No 10 jersey for him.

"We've reserved the #10 jersey just for you, @harrykane," RCB'scomment on the post read.

The fun didn't end there. England's wicketkeeper-batsman Jos Buttler found the time to encourage his countryman on his alternate sporting venture. "Get yourself in the @iplt20 auction," Buttler wrote on the post that has got over 199,000 views so far.

Harry Kane's Tottenham leads the Premier League table with 20 points from 9 games. According to a Neoprime study, football is the most popular sport in the United Kingdom while cricket holds the third position.

Here is the full video of Tottenham's cricket session: