No change in IPL venues

Despite number of cases &  fears surrounding the virus, BCCI to stick to Mumbai & Chennai

CHENNAI/NEW DELHI:  All of a sudden, the Indian Premier League finds itself in the midst of a dreaded covid fear in Mumbai. Even as some 10 ground staff of Wankhede Stadium and some half a dozen event management persons tested positive, the Indian cricket board is unmoved about changing the venue ahead of the April 9 start as of now. Mumbai and Chennai are the venues for the first leg. Apart from the logistical nightmare it is going to have, the time is not enough for changing the venue. A bubble needs to be created in another place, which would take at least 15 days.

According to a top IPL official, Mumbai, despite a steep rise in Covid cases, will remain a venue. All necessary precaution would be taken to prevent any further issues. The teams are in a bubble and as of now there is no indication that anyone had breached protocol. In fact, the BCCI apparently is approaching the hotels where the cricketers are harboured to bring in stricter protocol so that the teams are isolated from the outside world.

Changing grounds right now would create a lot of hassle for the BCCI. The players too had been moving from bubble to bubble and BCCI is confident of pulling it off. The organisers are bringing different set of groundspersons to the venue. There are speculations that Mumbai might go for a stricter lockdown if there is an alarming increase in numbers.

After Kolkata Knight Riders and Delhi cricketer Nitish Rana, now Delhi Capitals allrounder Axar Patel has tested positive for Covid-19. The 27- year-old had checked into the team hotel in Mumbai on March 28 with a negative report. However, his second report came out positive and he has been in isolation since at a designated medical care facility. “The Delhi Capitals medical team is in constant touch with Axar and ensuring his safety and well-being.

We wish him a speedy recovery,” was the statement put out by the franchise. The Delhi Capitals are training at Mumbai’s Cricket Club of India premises (Brabourne Stadium). The India international was last seen in action while representing the country against England in the first T20I on March 12. The rising number of cases in Mumbai and Maharashtra is a major concern with the first match in Mumbai scheduled for April 10.

2019 (Playoffs), 2020 (runners-up)... Delhi Capitals are getting close to their maiden title. Can they go all the way in the 14th edition? On paper, they are one of the strongest and most balanced side. Even though regular skipper Shreyas Iyer will miss the season due to a shoulder injury, this Rishabh Pant-led side with a good mix of youngsters and experienced campaigners could easily be the team to beat if things go according to plan.

They have one of the best set of Indian batsmen and spinners. More importantly, they are match-winners with the likes of Pant, Prithvi Shaw, Ravichandran Ashwin, Axar Patel in their ranks. Also, their squad depth is second to none. What provides Delhi an edge is their core, which more or less remains the same as last season sans Iyer, and it puts them in a good stead. 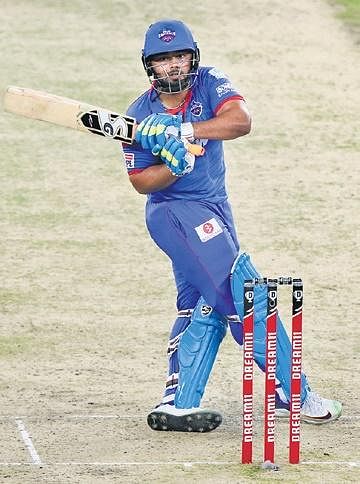 To be fair, they do not have a glaring weakness in the team. If any, there are question marks over the quality of Indian pacers. Delhi might claim to have Ishant Sharma and Umesh Yadav, but their economy rate of 8.09 and 8.51 does not bode well. It means they will have to depend on overseas players, including Kagiso Rabada and Anrich Nortje once again.

How will Pant (Rishabh) fare as skipper? The youngster might be an experienced IPL player, but leading a franchise is a different ball game altogether. One of the big decisions he, alongside the team management, needs to make is regarding the playing XI, especially picking four overseas players. Irrespective of the side, which takes to the field, Delhi have to strive for consistency. Last season, they were poor at the end of the group stages. They cannot afford such inconsistencies.

Now we are on Telegram too. Follow us for updates
TAGS
Wankhede Stadium