MUMBAI: With the Indian national football team nearing their primary goal of qualifying for the 2019 AFC Asian Cup, they are now hoping to further strengthen the bench. Stephen Constantine has already handed debuts to more than 30 players since he was re-appointed as India manager in 2015, and more are likely to be on the way as a young India squad takes on Mauritius and St Kitts & Nevis in a tri-nations tournament in Mumbai.

The hosts will will take on Mauritius in the opening game at the Andheri Sports Complex ground in Mumbai on Saturday. On the face of it, both the teams are lower-ranked than the India: Mauritius is No 160 on the FIFA charts while St Kitts & Nevis is placed 125.

But the Indian team was ranked outside the top 100 till the beginning of the year as well. They broke into the top 100 only in May after a string of winning performances. The Blue Tigers, currently ranked 97, has been unbeaten since March last year, a run of eight games. That includes two matches in the Asian Cup qualifiers, which has put them in pole position in their four-team group. 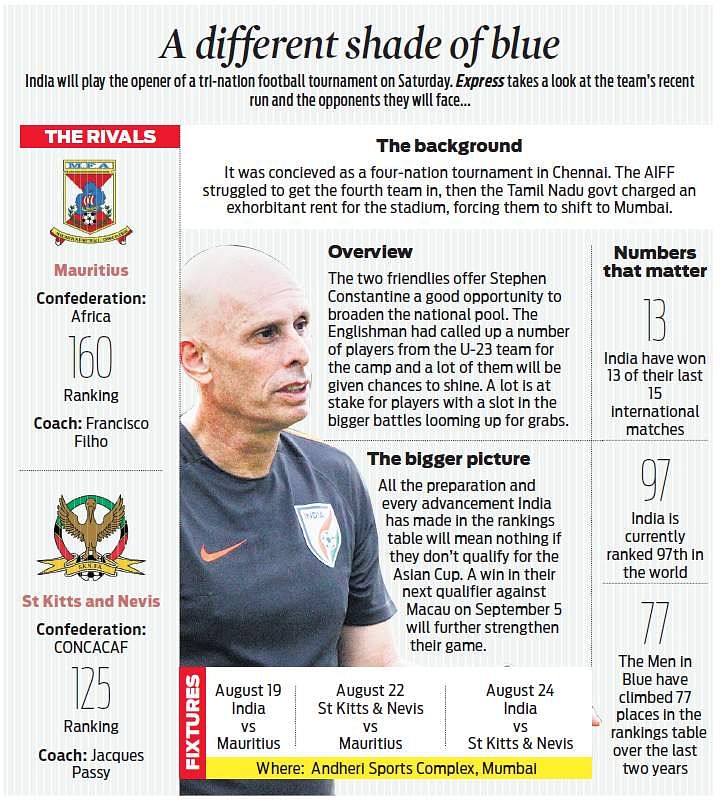 India’s next qualifying game will be against Macau, in Macau, on September 5. And the tri-nation cup in Mumbai will offer the team — sans Bengaluru FC players — some prep time. Ten players from the under-23 squad were in the camp held in Mumbai this past week for the tri-nations tournament.

“We were looking to get a friendly against someone like Hong Kong or Chinese Taipei, because they play a similar game,” said manager Constantine in Mumbai on the eve of the match against Mauritius. “But having two teams come here gives us more time and opportunity to try new players. It gives us time to reacquaint with each other.

Also, in Mauritius and St Kitts & Nevis we have two opponents who will give us different problems, and going further we need to play against all kinds of opposition.
“The vision is to first qualify for the Asian Cup and then compete with the big guns. We need to qualify for the Asian Cup on a regular basis before we can think about the World Cup.”

Though the Mauritius national team has been on the decline in the past few decades, they are trying to revive the sport in the tiny island-nation. Only this month they appointed Francisco Filho, a Brazilian who has worked as assistant coach to Sir Alex Ferguson at Manchester United, as the national manager and their star player, Kevin Bru, plays for English Championship side Ipswich Town. Similarly, St Kitts & Nevis may not be the most competitive Caribbean team in the world but they were ranked as high as 80 last year and can make life difficult for a young Indian team.

“We are not going to underestimate our opponents,” said Constantine, who has decided to hand over captaincy to central defender Sandesh Jhingan for the opener against Mauritius.

Talking about Indian goalkeeper Gurpreet Singh Sandhu’s move from Norway’s Stabaek FC to Bengaluru FC on Thursday, Constantine said it will guarantee the custodian some much-needed playing time. “He has made his decision and it was important to go where he will get to play,” said the 54-year-old. “It was a concern for me that he was not getting playing time in Stabaek. At Bengaluru, he will get at least 30 games a season, and he will be a better ’keeper for that. ”
deepti.