India have taken a giant step towards filling the empty office left by Nicolai Adam, after identifying the man they want to take over as the new U-17 coach.

CHENNAI: India have taken a giant step towards filling the empty office left by Nicolai Adam, after identifying the man they want to take over as the new U-17 coach. And he comes with the highest of recommendations — that of Portugal national team coach Fernando Santos.

The man in question is Portuguese coach Luis Norton de Matos. All India Football Federation secretary Kushal Das told Express that de Matos was recommended by Euro-winning coach Santos, his one-time teammate at Estoril. “De Matos was highly recommended by Santos,” Das said. “He spoke very highly about his tactical and man-management skills. He has a lot of experience. We also spoke to FIFA and they also held him high regard. So as of now, he is the front-runner.” 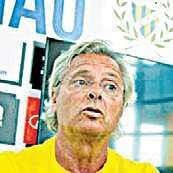 While AIFF has made their preference clear, it doesn’t mean that de Matos is a confirmed appointment. He will now be asked to come down to India in the first week of March and be interviewed by AIFF president Praful Patel and SAI officials. Other names like former head of youth development Colm Toal continue to remain alive. “He will now have to come to India and sit for an interview, which will be attended by AIFF president Praful Patel and officials from SAI. Only after that will his appointment be confirmed. As of now, he is just the frontrunner. We continue to have other options.” Das said.

De Matos started off at Benfica’s academy, but never managed to make the grade with the team. A striker, de Matos has made five appearances for the Portugal national team and has played for a number of top flight teams. He also donned the jersey of Belgian club Standard Liege, which has produced the likes of Marouane Fellaini and Steven Defour. After retirement, he has held a string of non-playing jobs including director of football at Sporting CP and manager of the Guinea-Bissau national team.

Boys all praise for Constantine

The U-17 team continue to train under national team coach Stephen Constantine. After being unable to get along with Nicolai Adam, the boys seem to have to taken to Constantine. “It is not every-day that we get to learn from a Coach who teaches Sunil Chhetri, Eugeneson Lyngdoh, Sandesh Jhingan and others,” said Suresh Singh, captain of the side. “It is a huge honour for us. Each day we look forward to the training session and to grab whatever knowledge we can get from them.”