As the sixth edition of Indian Super League takes off, fans are upbeat about Kerala Blasters’ chances of winning the title. Our lensmen Albin Mathew and A Sanesh capture the frenzy

KOCHI: Painted faces, coloured fumes, vociferous fans and booming drums. The football fanatics of Kerala have once again sunk into the razzmatazz of the beautiful game as Kerala Blasters FC (KBFC) took on ATK in the opening fixture of the sixth edition of Indian Super League on Sunday.

Proving their adulation for the game and bolstering the adage of Kerala being a hub for Indian football thousands of fans from across the state poured into the metro city to witness their idols roughing it out on the field. Abdul Samad, one such fan has come all the way from Badiyadukka, Kasaragod to watch the match. “It has now become an annual pilgrimage for me to attend the KBFC match since ISL’s inception in 2014. It’s not just a team. But, a passion that unites the entire state,” said the Yellow-clad Samad. 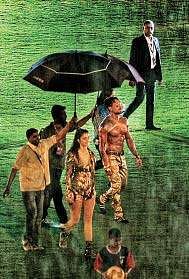 Like Samad, many hardcore fans thronged the stadium. “No matter what work comes my way, I have made it a priority to attend the matches. But JLN Stadium, Kochi is yet to become a wheelchair-friendly stadium. If the team stands for its fans, then KBFC should prioritise these aspects as well,” said Abdul Razik, a wheelchair-bound fan from Malappuram who came with his friend.

With the revamped squad, most fans are expecting a title-winning campaign from Kerala Blasters this time. Interestingly, not just boys, but a huge number of female fans also gathered for the opening match. “Stadiums were generally no-entry zones for women. But ISL has changed that and has attracted many families to the stadiums. I hope that things will improve further this season,” said Sraddha Shenoy, a student.

For jersey sellers and food vendors, every footballing season is a bumper. “Though I’m a caterer by profession, this (selling fried nuts and snacks during ISL) multiplies my love towards the game. I interact with fans to know about them,” said Hashim M, a street vendor who resides near JLN Stadium.

But there are a few discontent voices. “The new restrictions placed on vendors by the KBFC management have adversely affected our business. Earlier, we used to sell our merchandise in front of the stadium. Now we are forced to move away to the corners of Banerji Road,” said Ameen P K, a shop owner from Fort Kochi. Echoing a similar sentiment, Mohanan Nallappan, a face-painting artist from Chennai, said, “We are the ones who set the excitement going and usher in the mania before matches. If we are forced to exit from the premises, they are killing the soul of the game.”