The scoreline — France scored four to Croatia’s two — might suggest a stroll for Le Bleus but it was anything but.

MOSCOW: Of course, it was going to be a crazy final. How else do you top off one of the most dramatic World Cups of all time? But just how crazy this one was going to be, no one could have known. After all, finals are played as much by teams who don’t want to lose as they are by teams trying to win.

But not this one, the script for the final of the 2018 World Cup was written by a fickle writer who kept changing his mind faster than Kylian Mbappe could run a 100m dash. At times, he wanted Croatia to win, at times France. Men who were supposed to be primary protagonists found themselves recast as villains of the piece and others who looked like side-characters thrust abruptly into stardom. There we­re more twists and turns at the Luzhniki Stadium on Sunday th­an at an Olympic figure-skating arena. At the end of it all, France stood tall with an 18-carat gold trophy.

The scoreline — France scored four to Croatia’s two — might suggest a stroll for Le Bleus but it was anything but. There were times when it looked like they would be swamped over by Croatia’s relentless attacks. Indeed it took Zlatko Da­lic’s men only five minutes to carry out their first two raids into the French pena­lty area. The Croats began the match high on adrenaline and spirit and the French looked like they could not cope. 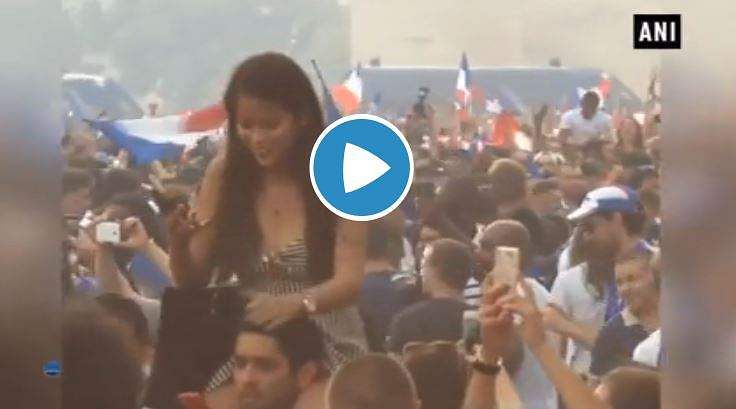 Then came the first twist — Croat striker Mario Ma­ndzukic, who everyone had expected to score, did so, but at the wrong end. As he stood staring at his teammates in confusion after nodding Griezmann’s free-kick in, the Frenchmen rushed to the corner flag. Their joy though lasted ten minutes. Croatia’s hero was someone who had been put together in France. Ivan Perisic had left his country for France at 16 to try support his family after his father went bankrupt. On Sunday, he drew Croatia level, firing in from 12 yards.

Another 10 minutes later, Perisic was stripped of the res­p­lendent robes of a hero and handed the dark ones of a vill­a­in. After he had cleared an innocuous-looking corner, the Fr­ench players ran towards the Argentinean referee Nestor Pi­tana with one arm pointing to the other raised one. Handball! they shouted.
Pitana conferred with his earpiece for a while, then peered at a television screen for an eternity before coming out and pointing to the spot. The Video Assistant Referee had made up his mind. Griezmann found himself on the spot with more eyes locked on him at the instant than any other man on earth. Then he calmly sent Danijel Subasic the wrong way.

After the restart, it was Croatia who seemed to be on the as­cendancy and an equaliser looked imminent. Then came two blows, just six minutes between them. First, Paul Pogba picked the most opportune time possible to score his first go­al of the tournament. Then the tournament’s breakout st­a­r, Kylian Mbappe, stamped his seal on the final. There was still time for more craziness. France captain Hugo Lloris da­­­llied on the ball too long and allowed Mandzukic to pull one back. Hopes were raised as the Croats sang out loud ag­ai­n. But the man in charge of writing this had run out of ink.

Stay up to date on all the latest Express@Russia news with The New Indian Express App. Download now
(Get the news that matters from New Indian Express on WhatsApp. Click this link and hit 'Click to Subscribe'. Follow the instructions after that.)
TAGS
France Pogba FIFA World Cup Kylian Mbappe Mbappe Croatia France vs Croatia Mario Ma­ndzukic