It was the ceremonial bath for the Frenchmen before their coronation as kings; the rain was meant to wash away their past sins and return them to the world, unblemished.

MOSCOW: As Croatia’s players wearily trudged to receive their reward for losing the final of the World Cup against France — a medal and a hug from their Prime Minister — the skies above Moscow abruptly opened up.

It was perhaps proof that there is genuine magic at World Cup finals, for it was an addition that lent a touch of surrealness to all the glittering lights, confetti and fireworks. If any of the Croatians were holding back tears, they could let go now, for the rain would have masked it.

When it was France’s turn to go up, the rain not only thickened, but transformed, for it was now no longer meant to wash away tears. It was the ceremonial bath for the Frenchmen before their coronation as kings; the rain was meant to wash away their past sins and return them to the world, unblemished. 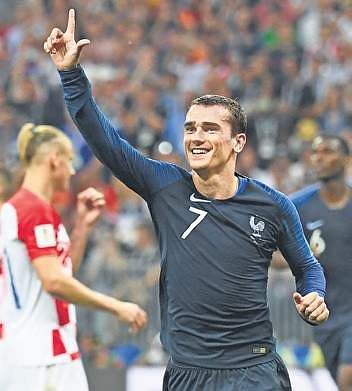 Their coach Didier Deschamps was no longer to be subject to abuse and ridicule, for he was no longer that champion of pragmatism who did not know what he wanted from his players. He was now a world champion. It washed away Antoine Griezmann’s failure to be the force that took the tournament by storm, for he scored one of France’s four.

Hugo Lloris will no longer have nightmares about the most embarrassing moment of his career coming true in the final. Mario Mandzukic may have robbed the ball off his feet and scored Croatia’s second, but it did not matter if it was 4-1 or 4-2.

Not to be ridiculed any more were Paul Pogba’s dabs, for he was now world champion. And when Kylian Mbappe starts his reign as the best player in the world, there will be no ques­­tions asked. Questions like if he can win a World Cup, or star in a final. For that was what he did on Sunday. His pace made Pogba’s goal. Minutes later, he went ahead and got his own.

To the side, the Croatians, ignored now for sport has no time for the valiantly vanquished, posed for their own group photo, pretending that Luka Modric’s Golden Ball was their World Cup trophy.  Ivan Perisic’s equaliser was a thing of beauty; a tap taking the ball where he wanted it, before unleashing a powerful drive to finish the job. The son of a bankrupt chicken farmer who earned his first professional contract with French club Sochaux had bitten the hand that once fed him. Then he set right things by conceding a penalty 10 minutes later. Mandzukic’s effort served to resuscitate the match just minutes after Mbappe’s goal had seemingly murdered it.

But it is so much more than just goals that make a World Cup final. It is the things that happen away from the action that broadcasters don’t deem significant enough to train their cameras on. Like when Domagoj Vida looked up at the sky and muttered aloud a prayer for divine intervention after France had taken the lead for the second time. Or like how Zlatko Dalic stood perspiring following Pogba’s third, like a prisoner watching a firing squad walk through the door.

Few noticed how Lucas Hernandez lay on the floor with his face in hands after misplacing a pass to Mbappe. Or how desolate N’Golo Kante looked after being subbed off in only the 55th minute of a World Cup final, even as his manager ran behind him, whispering words of consolation. As FIFA president Gianni Infantino walked towards the French team with the trophy in his hands, a bolt of lightning illuminated Luzhniki, better-timed than all the fancy fireworks that were about to follow.

Then, Les Bleus took it and raised it to the sky, towards the pouring rain. Two hundred and six years after Napoleon Bonaparte had retreated after a disastrous invasion, the country’s football team had conquered Russia.

1 Croatia played 90 minutes more than France to reach the final meaning Les Bleus was the fresher of the two sides. However, to the relief of Zlatko Dalic, the likes of Ivan Strinic & Ivan Perisic were passed fit to play as both teams fielded unchanged teams.

2 It was an uneventful first quarter. It all changed when France won a free-kick in the 17th minute. This World Cup has seen a fair share of goals from set-pieces & the final was no different. Griezmann’s delivery was headed into his own net by Mandzukic.

3 Perisic went from hero to villain in five minutes. The winger scored a stunning equaliser from a stinging low drive. But then he gave away a penalty for a handball from which Griezmann put France 2-1 ahead.

4 France’s individual brilliance took the game away from Croatia in the second half. Pogba showed his class, placing the ball past Danijel Subasic with his left foot. Mbappe then became the second teenager to score at a World Cup final after Pele.

5 Croatia pulled one back in the 69th minute, after some shocking goalkeeping from France captain Hugo Lloris. But France held on for their second World Cup triumph. Croatia can still return home with their heads held high.

Stay up to date on all the latest Express@Russia news with The New Indian Express App. Download now
(Get the news that matters from New Indian Express on WhatsApp. Click this link and hit 'Click to Subscribe'. Follow the instructions after that.)