For a nation which finds meaning of life in cricket, World Cup is amuch needed breather spread over a month. 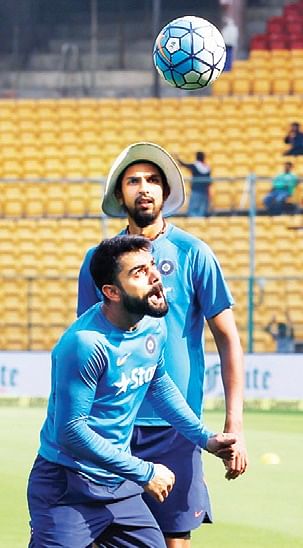 It’s the biggest sport in the world. Heck, it’s even got bigger balls compared to India’s preferred one. But then, despite its now-ameliorated popularity ever since the turn of this millennium, the sojourn of football permeating the collective sporting conscience of India is still one that is far from its point of culmination. There’s no argument about the engrossing nature of football; aficionados will vouch for the rush they derive from the sport.

Cricket, in that context, is quite the Slowpoke Rodriguez compared to its Speedy Gonzales of a cousin. But the ninety-odd minutes of blurry, geometrical patterns unfurling on the field for the sole purpose of intense tactical excogitation is the chalk to the cheese of the slow-burn high that cricket brings in tow for its fans. The potency of it notwithstanding, football and its inherent adrenaline were saddled with more of a bourgeois tag in India before the first digit of the year became 2, even in Tier I cities for that matter. West Bengal, Goa and Kerala may have been a couple of anomalies in this regard, but many a youngster was as insulated from football as a snake from the lilting tunes of a charmer’s pungi. Cricket’s grip was as strong as it is now. For the then-budding batch of millennials, parents’ sport-related benevolence was often restricted to either bats or balls. A full kit-bag, perhaps, for the more affluent ones.

If the rest of the world had Panini stickers showcasing the creme de la creme of their leg-slaloming magicians, the aforementioned children used to flaunt their hard-earned Center Fresh cricket cards like Medals of Honour. So much of chewing-gum chomping was required for the latter, after all. But, it was only when the Big Kahuna of football — also known as the World Cup — reared its head that the sport percolated its way into the daily routine of such youngsters. Namedropping of footballing legends and their exploits often resulted in dawdling outings of cricket being abandoned every now and then in favour of a quick joust of football. Jerseys changed from blue to other colours once in a while, and small talk between friends started containing occasional smatterings of those men who put bread on their table with their feet and heads.

That single child in every classroom would become sought after, for both his outrageous hairdo and his limited — but extensive for the rest — knowledge of what was about to transpire a few nations away. One month for the frogs inside the cricketing wells to jump out and meander around in the vast world of football. One month in four years it may be, but it still serves as a solid 30-odd days worth of filling a vast void in one’s sporting cognizance, nonetheless. Quite a few years, four World Cups and a couple of governments have gone by in the 21st century, and football has finally managed to jostle its way into the nation’s sporting conscience.

Sachin Tendulkar may still be the face on television for all sports, cricket and non-cricket alike, but the likes of Sunil Chhetri, Jeje Lalpekhlua, Subrata Pal, and Gurpreet Singh Sandhu have now started popping up sporadically during water- cooler conversations. Lionel Messi, Cristiano Ronaldo, Mohamed Salah, Antoine Griezmann, Manuel Neuer and a bevy of other international names had been added to that list over the last two weeks. The 2018 World Cup is almost upon us. Time for the frogs in the cricketing wells to jump out and take many a meaningful gander for the next month or so in the lush fields of football.

It’s common to see India cricketers warm up with a session of football. Before nets and even on match days, you see them running, kicking, falling. Some of them look as if they are used to it. A few look out of place. Nonetheless, as they say, the game goes on. A lot of them are addicted to Playstation and get busy with joysticks, controlling their favourite teams and players in the world of virtual football.

Kolhe has right to choose his roles, says Nana Patekar, recalls his own portrayal of Nathuram