FIFA World Cup 2018: Point to win, not to prove for Didier Deschamps' France

Under Deschamps, France focussed on utility football and getting the job done instead of grabbing eyeballs. 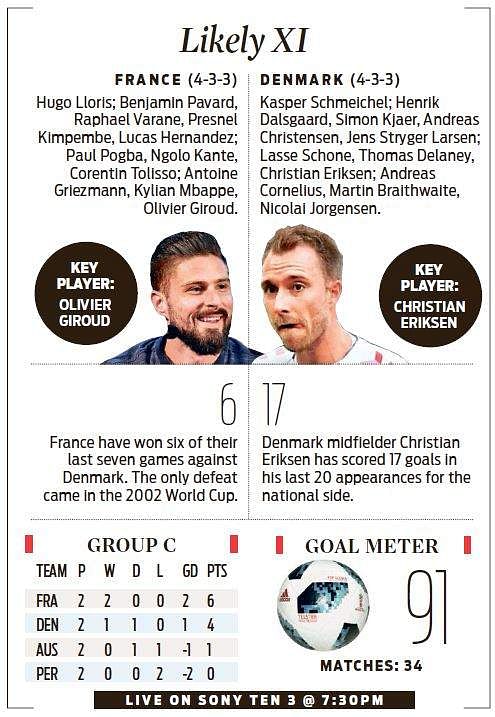 MOSCOW: It was almost like a role reversal. As France completed the second of their two unconvincing wins — over Peru, ensuring for themselves a knockout berth — their media reacted with the kind of negativity that is typically reserved for English teams by their press.

They attacked Didier Deschamps, Paul Pogba, their attack and their defence. Elsewhere, the English press purred over their team's display as Harry Kane and Co demolished Panama 6-1.

Sure, France have been nowhere near as convincing as they should have been, given how stacked their roster is. Their win against Australia was heavily assisted by VAR. Antonio Griezmann's penalty would probably have not been one without the technology, and they still needed an Australia own-goal to clinch all three points.

Against Peru, Deschamps returned to a familiar 4-4-2 after experimenting with a 4-3-3 against Australia. Paul Pogba, who played on the left side of the three-man midfield in the opener, was given command of the centre of the pitch this time, starting alongside N'Golo Kante.

Although Pogba's performance improved this time, the team's display was more of the same. After a first-half goal by Kylian Mbappe, France laboured to hold on to that lead as Peru launched attack after attack. It was strange to see the Les Bleus, pre-tournament favourites, resort to time-wasting against the lowly Peruvians as their fans jeered in disapproval.

But in a World Cup that has torn up pre-tournament reputations so far, France's perfect start — at least in terms of results — is priceless. Of the four or five pre-tournament favourites — unless you count England or Belgium in that bracket — they are the only ones to not slip up.

Germany stumbled in their opening act against Mexico, Hirving Lozano's goal making the difference, before nearly doing the same against Sweden. Spain and Portugal both dropped points running into each other. Brazil too were held by Switzerland and needed two injury-time goals to get past Costa Rica. And the less said about Argentina's start to the tournament, the better. If they manage to get into the knockouts from here, it will be thanks to the ineptitude of other teams in their group.

Clearly, this has been the World Cup equivalent of a chaotic, incident-filled opening lap of a Formula One race. By pure luck or otherwise, France are one of the few big names who have avoided the debris.

Deschamps still has a lot to figure out, with the Griezmann question being most important among them. The Atletico Madrid midfielder has made a sluggish start to the tournament, and a lot of that has to do with how Deschamps has struggled to get the most out of him.

But in the win against Peru, there was more than enough evidence of many minor levers falling into place. The match saw Olivier Giroud and Mbappe combine well. It saw one of Rafael Varane's best performances in the heart of the French defence — he is set to be handed the armband against Denmark as a reward. And Deschamps' tactical switch finally brought a lot more out of Pogba. There have been positives all over the pitch, hidden behind the cloak of sluggishness.

They can top the group with a draw against Denmark on Tuesday, but the reward for that might not necessarily be sweet. They might run into Argentina and Lionel Messi in the Last 16. But for France and Deschamps, it is about building momentum and figuring out solutions to the minor problems on field, which can help them peak at the right time.

“I will never tell my team not to win,” Deschamps told the press on Monday. “I want to my team to enter the match without any ambiguity in their mind.”