Whenever it was time for dinner in the Mane household, a young Udayan would long to join his father (Satish) and brother (Aditya) in conversations surrounding their golfing activities — sinking 20-foo

CHENNAI: Whenever it was time for dinner in the Mane household, a young Udayan would long to join his father (Satish) and brother (Aditya) in conversations surrounding their golfing activities — sinking 20-foot birdies or missing two-foot pars. Those moments meant a lot to him.
“Memories,” as Udayan tells Express. “I always wanted to be part of those stories.”
In 2005, golf was still referred to as an alternate sport in India, but he was definitely going to give it a try.
“To see where it took me,” as he recalls. “The only way I could become part of those memories, the laughter and reminiscing was if I ‘joined the club’ — started playing too.” 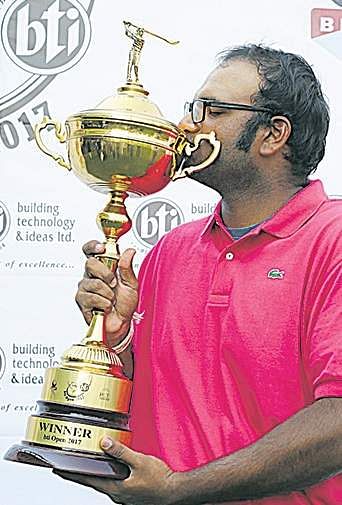 And on Thursday, when Aditya and Satish sat down to have dinner, the talk revolved around Udayan. The Bengalurean, only a few hours earlier had lifted the PGTI’s BTI Open.
“They were jumping up and down,” the linksman says.
He is satisfied with the victory. But it isn’t merely the story of happy tears following a win on the circuit for the first time since October 2015.

“In 2011, I had an opportunity to pursue my studies and golf in the USA (Lynn University or University of Tampa), but Vijay Divecha, who had seen me play before, got hold of me and asked me to reconsider.
“He told me that going there wasn’t prudent for my career, and it was a major step for me when I accepted his reasoning (not many who go there take up the sport in the long term). I also managed to represent my country as an amateur, before I turned pro in 2015.”

A lot of players on the PGTI circuit are more than happy to maintain status quo — putting security over testing themselves in harsher climes like the Asian Tour and beyond. The 26-year-old doesn’t want to be like that.
“Yes, there are plans in place to compete on the Asian Tour, as well as Asian Developmental Tour, as it would offer me the exposure and experience to further my development.”
There was a stumble after the two wins in three weeks during his rookie season in 2015 (just two top five positions in his next 25 tournaments).
But the next few events will offer a glimpse into whether the win at Dhaka, the first by an Indian in six years, is a stepping stone to bigger things.