In search of national opportunities, Jagdeep still looking towards the light

The goalkeeping stock in India has never been higher. In the hockey national squad, there is PR Sreejesh, goalie extraordinaire and captain.

CHENNAI: The goalkeeping stock in India has never been higher. In the hockey national squad, there is PR Sreejesh, goalie extraordinaire and captain. The able Vikas Dahiya, his deputy, has done well as No 1 keeper of the junior squad. Then there is Krishan B Pathak, the second custodian in the victorious Junior World Cup campaign last December. The coffers are full and getting past one of these guys is no easy feat.
And Jagdeep Dayal is one of those attempting to do so. Currently playing in the Indian Bank state-level invitation hockey tournament here, he was one of the best young goalkeepers at the beginning of this decade and backed that up with some brilliant performances, especially at the South Zone senior men’s championship, where his displays helped Karnataka win and make the then IHF senior national championship. 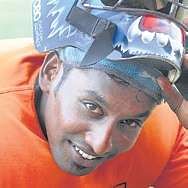 He even made the 2013 Junior Men’s World Cup squad as a standby but injury hampered his progress. “I got a glute injury midway through the nationals in 2014. That hampered my progress, both as a keeper and in terms of making the leap into the senior set-up. But the last two years have been good, and though I haven’t had much tangible success, I feel my keeping is coming along well,” Jagdeep told Express on Monday.

The 26-year-old revealed he was playing for Indian Bank on invitation and is still looking for employment. “I’m not playing for them as an employee. They have been calling me for a while now to play with their squad but I couldn’t make it for some reason or the other. This time, I was free and made sure to come here and play with these boys. But in terms of a job, I’m still looking. I haven’t gotten anything yet but, hopefully, something will come up soon, and preferably in hockey.”

The Kolar Gold Fields native still harbours hopes of playing for India one day and also in the Hockey India League. “Of course, that is the final aim and hopefully I can get fulfil that ambition soon. It’s all about putting in my best efforts whenever I get one field, no matter which event I’m playing in. The likes of Sreejesh and Dahiya are doing a good job right now, and it won’t be easy displacing the at all. But one can be allowed to dream.

“I was also close to making it in the HIL. I did figure in the 2014 auction but did not get picked,” he concluded.