GOLD COAST: Contrary to belief, powerful legs are more important than hands to succeed in weightlifting. Those bulging biceps are a misnomer for good lifters. Hands are used to hold aloft the weight — yes you need power for that — but the explosiveness depends on the powerful thrust you generate when you push your legs against the platform. 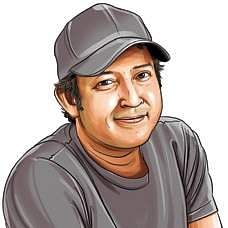 India’s Sathish Sivalingam was crippled even before he stepped on the platform. His quadriceps on both legs were hurting bad. He did not want to miss the Commonwealth Games. “Not in a million years,” he said.

What the 26-year-old failed to do with his body, he compensated for it with his experience and an astute mind. He strategised.

“I have not lifted more than 130kg in the last three months,” Sivalingam admitted after his gold-winning performance in the men’s 77kg category. Like a chess master, he calculated and put weights on the barbell.
The display board reflected his nervousness as it kept shifting his weights (lower to higher; higher to lower). He wanted to come out last but he didn’t know what weight he would be able to lift. “I was not confident,” Sivalingam said. His first objective was to assure a medal, then go for gold.

Egged on by a huge crowd at the Carrara Sports Arena, Sivalingam lifted 317kg over two rounds. In the 2014 Glasgow Commonwealth Games, he had managed 328kg with a Games record in snatch (149kg).
His best snatch lift on Saturday was 144kg, while he lifted 173kg in clean and jerk — something he is not proud of. “But with the injury I am carrying, I cannot complain,” he said. He had injured himself while hoisting 184kg during the Nationals in Mangaluru earlier this year.

“I am satisfied because I did not do too much training over the last three months. I had lots of injuries. But I protected myself. So I am very happy with my performance,” he said. With the medal in his pocket, he wants to undergo extensive rehabilitation. “I need to get fit before the Asian Games,” he said. “It’s a very proud moment for me. I want to dedicate this medal to my coaches, who were the backbone of this performance, the people of Tamil Nadu and the nation and all those who believed in me.”

Until his final lift in snatch, he did not have much hope. “But once I managed that, I was hopeful of a medal,” he said. “Before the competition started, I did not think I would win gold. But I left it to God. All these years of experience also worked to my advantage today.”

“I did not lift 176kg (he skipped his last clean and jerk attempt) because that would have worsened my injury and complicated my rehabilitation,” he said. “But yes, if I needed to, I would have done it. I know how important this gold is for India.”

He also rued the lack of a physio staying with the team. “Maximum treatment (for weightlifters) happens at night and our physio cannot enter the village then. It would be nice to have him with us during that time,” he said. “But if they can solve this for the Asian Games, that would be good.”
After the Games, Sivalingam will go to Patiala for rehabilitation, from where he will head to Vellore where he has opened an academy. “My father will be waiting for me,” he said.