Ajith rises above other Heroes to power Calicut past Spartans

Scores of fans wearing the red and white jersey of Calicut Heroes raised the decibel levels when Jerome Vinith led the team onto the court.

KOCHI: Scores of fans wearing the red and white jersey of Calicut Heroes raised the decibel levels when Jerome Vinith led the team onto the court. The noise only got louder after seeing Paul Lotman.
Calicut and the north of Kerala are the heart of the state’s volleyball scene, and they worship their heroes. Jerome is a star in this part, and everyone knew what to expect from him. On the other side of the net was another star: Akhin Jas. 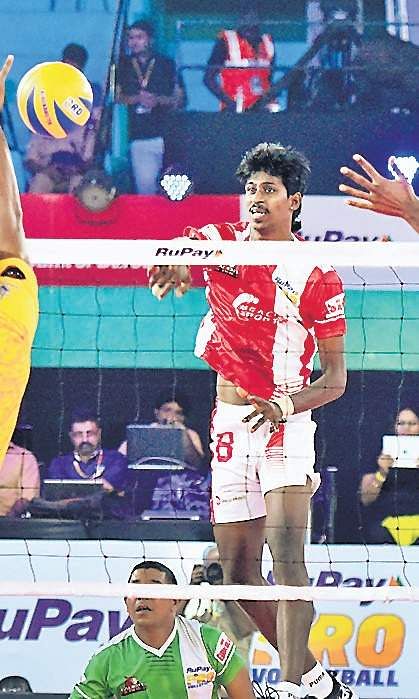 They were the men who were expected to take centre-stage when Calicut Heroes and Chennai Spartans clashed in Pro Volleyball League, in what can loosely be termed as a derby. But on Sunday, at Rajiv Gandhi Indoor Stadium, a 22-year-old stood head and shoulders above all of them. Ajith Lal was unstoppable on the night, and that was evident from the figures he notched up.

successful serve, Jerome played to the gallery and ended the game with 10 points.
Ajith was less animated. But the aces he kept dishing out left the fans asking for more. The attacker is not a rookie. He had helped Kerala win the national title last year. He was also the youngest player in the Indian team that participated in the 2018 Asian Games. He is still a junior when it comes to the national team, but his latest performance is evidence that he could figure in India’s attack in the years to come.
Here, he was up against Akhin Jas, one of the best blockers in the business. But Akhin and his teammates could do nothing about Ajith’s pace, power and anticipation.

This league has brought in some big names like Lotman and David Lee to add to the star value. But it was heartening to see a young talent like Ajith outshine the former, who has been part of two Olympics. Lotman did contribute to the cause with ten points, but five of them came in the fifth set, when the game had already been taken away from Spartans.

The visitors briefly threatened to stage a fightback, winning the third set after losing the first two. However, Jas’ men were unable to work out a defence against Ajith.