Armed with new techniques, 17-year-old hoopster all set to up her game

Grishma Niranjan wakes up every day at 5.45am to head for her two-hour basketball practice before attending school.

BENGALURU: Grishma Niranjan wakes up every day at 5.45am to head for her two-hour basketball practice before attending school. Once the school bell rings, she’s back on the field for another couple of hours. This has been Niranjan’s routine for the last three years, before which she only trained during the evenings. 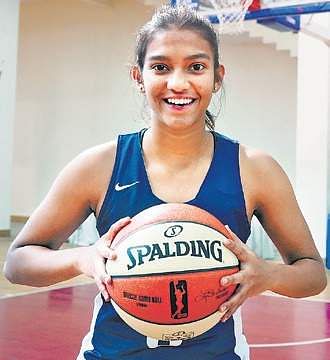 Her hard work paid off when the 17-year-old city girl was awarded the MVP award at the NBA Academy India’s Women’s camp at Greater Noida last month. Having won it in a competitive field of top 24 U17 girls from the country, this award will always be close to her heart and one of the highlights of her sporting career.

However, the camp was more than these honours. In addition to boosting the learning curve, it gave the group of youngsters a chance to get quality coaching from well-known figures such as Jennifer Azzi and Blair Hardiek, who were both present at the camp. The duo passed on some important inputs to the players, who will put that into practice and help improve their game in the near future.

Niranjan has been mighty impressed with the way they conducted the training, completely different from what she had learnt earlier. The youngster is now keen on following and implementing what she picked up at the camp. Besides, she has also been advised to take up weight training as well. “They stressed on the fundamentals such as ball handling and shooting. They have taught us some important drills, which I want to follow through and through. I made notes from the training we were given at the camp to make it a part of my routine. Such camps change perspective on the technique of the game and also the manner in which one should train for the game too. It is a huge exposure,” said Niranjan, who had won the sharp shooter award in the camp last year as well.

Like all young hoopsters in the country, the Class 11 student from Mysore Education Society wants to represent the Indian senior team. She was part of India’s U16 Women’s Asian Championship in 2017, but failed to make the cut last year for the U18 event. But, this has only made her stronger in terms of improving her game and becoming a better player.

The guard is patient enough to wait for India’s cap, but is relatively confident of making it to the national team by next year. “For that I need to work hard. If I train consistently, then may be it could be a possibility in one-and-half years,” says Niranjan.

Stay up to date on all the latest Sport news with The New Indian Express App. Download now
TAGS
Grishma Niranjan Basketball Player