The 22-year-old has improved steadily since shattering the world junior record at the 2016 U-20 World Championships with a throw of 86.48m.

BENGALURU: Athletics is a discipline Indians are not good at. The country is still to win an Olympic medal in it. But come Tokyo 2020 and someone will be hoping to break that drought. That’s javelin thrower Neeraj Chopra. His best of 88.06m was bettered by just five athletes in the world in 2018 and it would have fetched him bronze at the Rio Olympics in 2016.

The 22-year-old has improved steadily since shattering the world junior record at the 2016 U-20 World Championships with a throw of 86.48m. He won gold at the Commonwealth and Asian Games and came close to finishing third in an IAAF Diamond League meet in Doha last May, where he finished fourth.

However, at the World Championships in 2017, Chopra failed to qualify for the finals, managing only 82.26m. Training at the facility of the North West University of Potchefstroom in South Africa under German coach Uwe Hohn, he is trying to achieve consistency.

“If I have a throw of 90m in one event and don’t repeat that again, I don’t think it will help me. I don’t want to put myself under pressure to throw a particular distance, but I have to consistently improve my throws. From 82-83 in 2017, I am currently averaging 85. The target is to throw in the 86-87 range,” Chopra told this newspaper from Potchefstroom.

The North West University has housed several world and Olympic champions. It will be Chopra’s base till the end of March. “I have been working on my core, strength and throw techniques. I haven’t changed anything in my training regimen. But I have been putting extra efforts to better my skills. The centre here is taking care of my diet and nutrition. The supplements that I take have also been taken care of.”

According to him, focussing on work can be a problem back in India at times. “The problem in India was that I was not able to concentrate on training as I had to attend family and public events. Here, I don’t have those distractions. Facilities are excellent and I can focus fully on training. It’s been great training under Hohn. He has helped me improve my strength and you can see that in the results. I had a throw of 88.06m at the Asian Games and it shows the improvement I have made under him.”

“All these events are very important, especially this being an Olympic qualification year. The aim is to do well in all three to qualify for the Olympics,” said Chopra, who started training in South Africa in January. 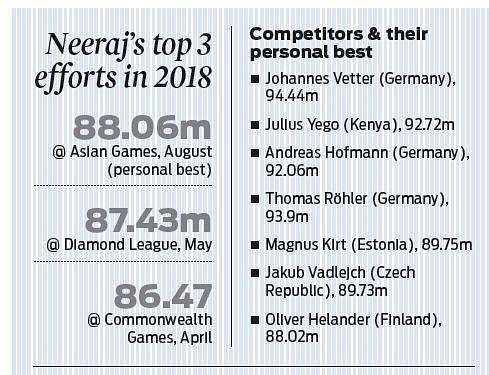