Samaresh Jung had earned the nickname of ‘Goldfinger’ thanks to his exploits at the 2006 Commonwealth Games in Melbourne, where he was adjudged the best athlete.

CHENNAI: Samaresh Jung had earned the nickname of ‘Goldfinger’ thanks to his exploits at the 2006 Commonwealth Games in Melbourne, where he was adjudged the best athlete. At present, the former Commonwealth Games champ is donning the coach’s hat and is looking to pass on his wisdom to the current crop of Indian shooters who will be taking part in the upcoming ISSF World Cup in Delhi.
It’s a big assignment for the Himachal Pradesh-born coach and the shooters as they look to make home advantage count and start season with a bang. 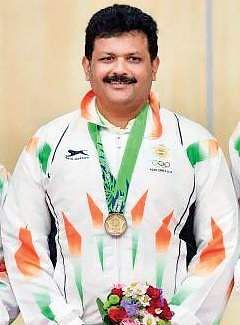 They have been improving leaps and bounds in the last few years and the 48-year-old is focussed on maintaining that trend. “I just expect them to perform to their capacity. Winning a quota is not in their hands. There will be one quota in each event, three Indians will by vying for that. And there are other top foreign shooters who will be fighting for the same. So, it’s going to be a big ask,” he said.

The Arjuna awardee is confident that winning Olympic quotas is a matter of if and not when. “They can shoot very well, but somebody else could ace them. It doesn’t mean they have performed poorly. I just want our shooters to do what they have been doing in recent times. If they maintain the consistency, they are going to get the quota sooner or later.”

Manu Bhaker, Saurabh Chaudhary, Heena Sidhu and Rahi Sarnobat are some of the shooters who are in the mix. It becomes a tricky proposition for Jung and the rest of the coaches. “They (seniors) have the experience, they know what to do. With the youngsters, we have to constantly be in touch with them, explain things to them. I’d rather explain things to them. Having said that, they (youngsters) are highly talented and can go a long way.

“The biggest challenge right now is how to maintain them. How to make them go the distance. There’s a high chance they can burnout.”

With the influx of young guns, the country has seen multiple seniors pushed to the sidelines. There are are a total of eight shooters (shooting for medals) who will be competing in the World Cup for the first time. Jung, who is employed with the Central Industrial Security Force (CISF), said that it’s a normal cycle. “It’s a normal part of shooting. There are always ups and downs for every individual. To expect somebody to be always on top is putting too much load on that person,” the Olympian, explained.

But Jung sees this competition as a boon.“You have quite a nu­mber of people who can replace each other. A couple of bad performances could open the door for people waiting on the wings. It’s good to have competition. So people are on their toes.” The shooters would be aware of this ‘problem’ and it could push them in the Delhi event.