Bhatia ensured that the shooters from across the border will face no problems.

CHENNAI: Pakistan shooters are more or less confirmed to take part in the ISSF World Cup in New Delhi. According to the National Rifle Federation of India (NRAI), they have been granted visas for the event beginning on February 23. There were clouds over their participation after last week’s Pulwama terror attack, in which at least 40 CRPF personnel were killed. 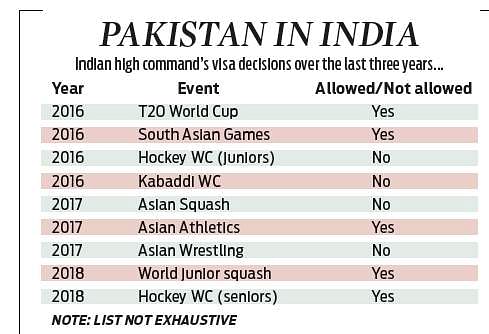 “They have been granted visas. I have got a confirmation from the Pakistan High Commission,” Rajiv Bhatia, NRAI secretary general, told this newspaper on Monday.

Earlier, the National Rifle Association of Pakistan (NRAP) had reportedly said it would not be sending its shooters if visas are not issued by Monday evening.

The Indian government had apparently granted clearance to them, but that was before the attack, which triggered mass condemnation and also calls to cut off sporting ties with Pakistan. There has also been tension within the country, with Kashmiris allegedly being subjected to threats.

Bhatia ensured that the shooters from across the border will face no problems.

“We are not worried about that. We will ensure that it (safety of Pakistani shooters) is taken care of.”

The two Pakistani shooters taking part are GM Bashir and Khalil Ahmed. Both will be competing in the men’s 25m rapid fire event. It’s unclear when they will reach. Their event is scheduled to begin on February 25. This World Cup is the first of the season and has 16 Olympic quotas on offer.

After getting the assurance that visas have been granted, the NRAP president Razi Ahmed said that air tickets for the shooters and the support staff had been booked.

The No Objection Certifica­tes required to carry ammuniti­on to New Delhi had also been ob­tained. The last time Pakist­an shooters participated in an ev­ent hosted by India was the 20­16 Asian Olympic shooting qu­­alifiers. A total of 10 shooters had come over for that competition.

It’s a massive World Cup for the shooters as quota places earned here could give them more preparation time for the Tokyo 2020 Olympics.