CHENNAI: The Indian Olympic Association wants to boycott the 2022 edition of the Commonwealth Games. Even though a few inside IOA had suggested this in the recent past, as reported by this newspaper, the notion was put down in writing on Friday.In a letter to sports minister Kiren Rijiju, IOA president, Narinder Batra, said the move is needed to ‘start asking tough questions and start taking tough positions’. “We want to express our protest by not taking part in 2022 CWG in UK to make the CWG understand that India is not prepared to take India bashing anymore,” Batra wrote.

“(...) and the people with a particular mindset in CWG need to understand that India got its independence in 1947 and India is not a colony of anyone any more...”This development comes a month after the Commonwealth Games Federation’s decision to accept all the proposals put forward by the Birmingham delegation. They had said that shooting, an optional sport, would be dropped. IOA secretary general Rajeev Mehta was the first to talk about a boycott. The sports ministry in June itself had stated that the IOA cannot take decisions without proper consultation. 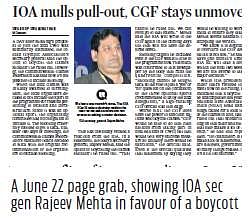 “If you have to boycott, you have to ask the government because these decisions are not to be taken unilaterally,” Rijiju had said.While scores of other athletes will be affected by a boycott, this is just the first stage in that process. The next is when Rijiju invites Batra & Co. for talks. “We realise and understand that such decisions have to be taken by keeping in mind the political sensitives.

We in IOA are not experts in that field and that is why we vide thru letter seek appointment for IOA president along with IOA office bearers to meet your goodself to deliberate further on the issue of the proposed boycott.”

Why does the IOA want a boycott? The answer lies in the medals shooting has won for India. In the five CWG editions in the 21st century, 55 out of India’s 131 gold have come from shooting. With no shooting to prop them up, there is fear, they might finish seventh or eighth. Batra indicated as much in the letter. “By removing shooting, India’s ranking will go down from 3rd in 2018 to anywhere between 5th to 8th.”

Batra was also sarcastic as he hinted that the organisers deliberately did this. “We have been noticing over a period that wherever India seems to be getting grip of the game and performing well, then somehow we feel that either the goal posts are shifted or rules are changed.” Birmingham organisers made it clear in 2017 that shooting will not find a place as it did not have the necessary infrastructure.

The next chapter will be written when Rijiju sits down with Batra, who also took this opportunity to inform the minister that IOA, subject to ratification of the IOA EC, will not attend the CWG Congress in September. “Meanwhile, we have taken two decisions subject to ratification of IOA EC that IOA/CWGF of India will not attend the Congress of CWG in Kigali. (...) names of Rajeev Mehta and Namdev Shirgaonker will be withdrawn from the CWG elections.”

Now we are on Telegram too. Follow us for updates
TAGS
Commonwealth Games Indian Olympic Association