Tokyo Olympics postponement means her marriage to wrestler Bajrang Punia might not be possible this year.

CHENNAI: Tokyo Olympics postponement means her marriage to wrestler Bajrang Punia might not be possible this year. But youngest of the famed Phogat sisters, Sangeeta Phogat, is considering it as a blessing in disguise to fulfil her own Olympic dream.

The duo got engaged in November last year and was supposed to tie the nuptial knot after the 2020 Tokyo Olympics. The coronavirus pandemic, however, has forced them to alter their plans.

“Bajrang and my family motivated me to return to the mat,” Sangeeta told this daily. The wrestler suffered an anteri­or cruciate ligament (ACL) te­ar in April last year during the national camp at the SAI Centre in Lucknow. “It needed surgery. The rehabilitation took seven to eight months. I had never pa­r­ticipated in the Olympics and this deferment has given me a chance to make an attempt to qualify for it.” 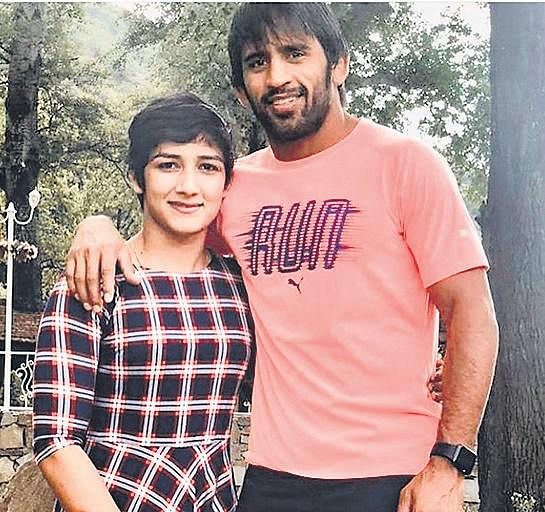 The 22-year-old is training at the Pratap Sports School in Kharkhoda, Harayana. “Bouts are out of question at the moment due to social distancing norms but I am doing physical exercises like weight training and running twice a day. The workouts will keep me in good stead when I return to competitive wrestling,” she added.

Before the injury-induced layoff, the wrestler was competing in the 59kg weight category. The former national medallist, however, is planning to move up to 62kg, which is an Olympic weight division. It will not be an easy task to make a return to the national fold as Rio Oly­mpic bronze medallist Sakshi Malik and a few talented youngsters including Sonam Malik compete in the category. Sangeeta, however, is optimistic. “Every weight category is competitive in the country given the wrestlers we have at the mo­­ment. The only thing I am thinking is qualifying for the Games. It’s a golden opportunity and I cannot allow it to slip out of my hands.”

Vinesh Phogat (53kg) is the only Indian woman wrestler to qualify for the quadrennial event so far. The remaining five quotas in as many weight categories including 62kg division are still up for grabs. “Two qualifiers – Asian and World – will be held before the Games. I am ready for the trials if the Wrestling Federation of India (WFI) wants me to prove my fitness. It’s too early to speak on it but once normalcy returns, I will speak to the federation and express my wish to participate in the Olympic qualifier,” Sangeeta signed off.