KOCHI: For a speed fanatic, there is perhaps nothing more thrilling as riding a bike on a racing track. Thiruvananthapuram native Harikrishnan K S, who aspired to be a bike racer all his life, has always dreamt of this experience. He stepped into the world of bike stunts in 2008 through the team DNA/Rods.

Though he left the field four years later to pursue a career in media, the passion for racing remained intact. This urged him to participate in the Rally De Mangaluru leg organised by the Indian National Rally Championship (INRC) in 2018 where he finished first in the two-wheeler race. Recently, the youngster stood third in the Rally De Coimbatore conducted as part of INRC 2020.

“There were a lot of uncertainties due to the pandemic. Last year’s championship was conducted this year and it was great to be back on track. I was happy meeting the talented racers from other states. They even gifted safety masks to the winners,” quips Harikrishnan. He also came third in the Rally De Mangaluru leg in 2019. “It feels good to finish top three in consecutive years. I’ve been practising in a plot behind my house,” says Harikrishnan,Harikrishnan, who competes in the Super Sport 130 Group B Class 2 category, took around one hour 15 minutes to cover 128 km for the race.

However, finishing third in the race wasn’t an easy task for the youngster. “The gear lever broke during the race. I was riding on second gear and had to ride the remaining race in that way. So I couldn’t touch a higher speed at the spots where I could. I would have easily finished second if this hadn’t happened,” added Harikrishnan who faced issues with his bike’s silencer and engine during the previous races. 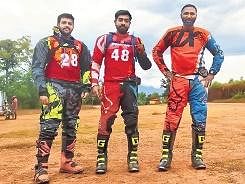 Harikrishnan, who has competed in individual races in INRC, has started preparing for the championship to be held this year which features seven races in Indore, Nasik, Baroda, Pune, Coimbatore, Bengaluru and Mangaluru. “Everything would cost around Rs 3.5 lakh. I aim to win the championship this year. I took a break from bike stunt riding to earn money for competing in racing events.

No one from Kerala has won the INRC yet. I want to change that. I will be going fully eqipped with spares and my service team so that I can ride confidently in every leg. The DNA/Rods team has always been my biggest support.” He is accompanied at the races by co-riders Yogesh S P, Hari Kumar, Niyas Muhammed and managers Harish V and Abhilash.

Harikrishnan says the city needs a dirt track for practice. “There is enough space near to the Greenfield International Stadium. We are planning to meet V K Prasanth, MLA, and propose the idea to set up a track there. Kochi, Kottayam, and Thrissur already have them.”

Raring to go
Harikrishnan, who has competed in individual races in INRC, has started preparing for the championship to be held this year which features seven races in Indore, Nasik, Baroda, Pune, Coimbatore, Bengaluru, and Mangaluru. “Everything would cost around H3.5 lakh. I will be going fully eqipped with spares and my service team so that I can ride confidently in every leg,” he says.

Now we are on Telegram too. Follow us for updates
TAGS
Harikrishnan Rally De Coimbatore Thiruvananthapuram bike racing