For instance, the report has no mention of India’s top three singles players: Yuki Bhambri, Ramkumar Ramanathan and Sumit Nagal.

CHENNAI: The International Tennis Federation (ITF) published its player-by-player anti-doping testing statistics for 2017 on Monday, and a few details stood out. For instance, the report has no mention of India’s top three singles players: Yuki Bhambri, Ramkumar Ramanathan and Sumit Nagal.

Considering that they had tested the likes of Gnana Baskar Paramatmuni Venkata, a 19-year-old who has never played on the ATP World Tour, it seemed a big strange.

ITF, the body responsible for a unified Tennis Anti-Doping Programme that applies across all events, revealed that it had tested a total of 13 Indian players — some both in in-competition and out-of-competition categories — in 2017.

The above-mentioned players may have been tested by the National Anti Doping Agency in this time period, but the ITF says that they haven’t included those statistics in this report.

“The figures do not include any testing by National Anti-Doping Organisations (NADOs), eg Indian NADO (sic),” the e-mail went on state further. Ramkumar and Yuki were tested by ITF in 2016.
Among the ones who were tested by the body last year, doubles players unsurprisingly feature in a prominent manner in the report. 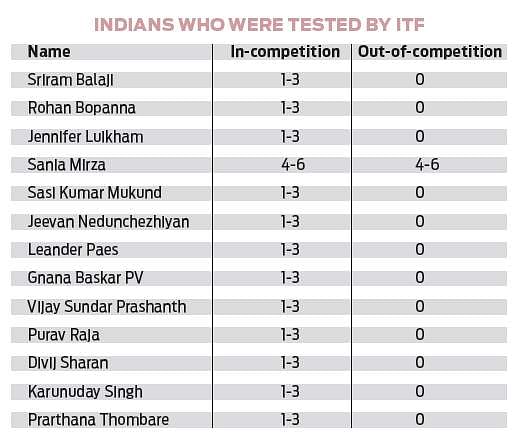 Sania Mirza, who shut down her season in early October thanks to an injury, was tested 4-6 times in-competition and the same number of times out-of-competition.

The body tested Russian Maria Sharapova, who came back in 2017 after a drug-related ban, 7+ times out-of-competition. She was also subject to 1-3 tests in-competition.

Both Roger Federer and Rafael Nadal, who won two Majors each last year, were tested most number of times. The two were tested more than seven times in-competition and an equal number in out-of-competition. Some other players who were subjected to this kind of treatment were Karolina Pliskova, Jelena Ostapenko and Sloane Stephens.