Not paid for 10 months, Kesineni workers spill onto Vijayawada streets

As many as 110 employees staged a protest near Kesineni Bhavan as this has thrown out of employment hundreds of workers for whom the company was the sole source of livelihood.

VIJAYAWADA: “I have been driven out of my house by my wife who told me not to come back unless I get my salary arrears of ten months,” wailed M Nagaraju, a cleaner from Kanchikacherla village who has been working at Kesineni Tours and Travels for a decade now. Holding a bottle of poison in his hand, a drunk Nagaraju threatened to end his life if the management did not pay up immediately.

Similar is the fate of another 400 employees of the company -- including drivers and cleaners -- in Vijayawada, Hyderabad, Chennai and Bangalore.

They spilled onto the streets after Vijayawada MP Kesineni Srinivas alias Nani shut down his family-owned travels business after facing losses. This has thrown out of employment hundreds of workers for whom the company had been the sole source of livelihood for many decades. 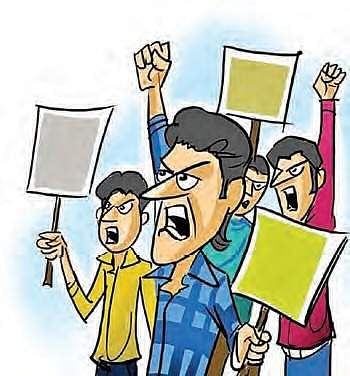 On Monday, as many as 110 employees of Kesineni Tours and Travels staged a massive protest near Kesineni Bhavan in the city here, demanding that the MP pay their salary arrears pending for the last 10 months.

Sensing trouble, police reached the spot in no time and prevented them from barging into Kesineni Bhavan. Earlier, the employees had taken out a rally from Kesineni Tours and Travels administrative office in Hanumanpet in the city, denouncing the indifferent attitude of the MP.

“On several occasions I approached the general manager of the travels, Satish, urging him to pay salary arrears, but my pleas fell on deaf ears,” Nagaraju told Express.

Over the months, the management has been procrastinating on taking a decision on the payments. I have taken `30,000 on high interest from a private money lender to save my family from starving. There is no option left for with me but to commit suicide,” he said.

Another employee, M Kumar, a driver from Kakinada who has been associated with Kesineni travels for the last 15 years told Express a vernacular daily had recently published that the travels had paid three months’ advance to employees before winding up the business.

“It is not true. It hurts that Nani cannot spend even 10 minutes of time with us. We worked day and night for the company, but we have now been left to fend for ourselves. On top of this, some of his staff are threatening to slap police cases against us if we demand salaries,” he said.

“How can Kesineni Nani wind up his travels business without informing his staff earlier? None of the travels operators are willing to employ staff from Kesineni Travels,” said Ch Siva, a driver from Nandigama worked at the company for nine years.

“I used to drive between Hyderabad and Chennai and I need to be paid `81,000 in salary arrears. Over the months, my family and I survived on beta paid to us on every trip,” he said. MP Kesineni Srinivas was unavailable for comment. His associates said a meeting would be convened with the employees on Tuesday and the matter would be sorted out soon.

Now we are on Telegram too. Follow us for updates
TAGS
Kesineni